Today’s post is written by James Rush, a supervisory archivist in the textual processing unit at Archives II.

On June 8, 2011, the National Security Agency announced that it had declassified and released to the National Archives and Records Administration over 50,000 pages of historic records relating to cryptology and the history of intelligence gathering. The bulk of these documents cover a time-frame from before World War I through the 1960s.  Included among this treasure trove of information on the history of spying and tradecraft is a document entitled “Cryptology: Instruction Book on the Art of Secret Writing,” dated 1809.

The title page of Cryptology.

Secret writing is a simple method of writing in code.  A skilled individual, using this technique, would create what appeared to be an unexceptional document.  However, that document might well contain a secret message.   The art and science of writing hidden messages in ways that no one apart from the sender and the intended recipient could decipher the message, a form of security through obscurity, has a long history.

In ancient Greece, Herodotus tells the story of a message tattooed on a slave’s shaved head, hidden by the growth of his hair, and exposed by shaving his head again. The message allegedly carried a warning to Greeks about Persian invasion plans. This method of “secret writing” had obvious drawbacks.

An excerpt from the middle of the document.

In the 1770s, intelligence work was more ad hoc. Great Britain had a tradition of successful—but sporadic—intelligence work beginning with the Tudors, but no permanent secret service. Even code breaking was farmed out to contractors. The American revolutionaries had fewer funds and no clandestine tradition, a severe disadvantage during the war for independence.  In 1997, the Central Intelligence Agency honored three patriots as the Founding Fathers of American intelligence: Benjamin Franklin for covert action, John Jay for counterintelligence, and George Washington for acquisition of foreign intelligence.

In 1809, Johann Ludwig Klüber, the first professor of law at Heidelberg University and Supervisor of the Mannheim observatory, published “Cryptology: Instruction Book on the Art of Secret Writing” in Tubingen, Württemberg.  The folio was placed in the Prussian Staatsbibliotek (State Library) and cataloged as V 8872.

After the defeat of the Nazis during World War II, United States intelligence analysts began combing through mountains of German government records.  Included among this material was Professor Klüber’s instruction book. The document declassified and released by the National Security Agency is an abstract of this original folio.  Written in German, the abstract outlines various techniques for secret writing, with specific page and chapter references to the original document.  Also included in the abstract is an historical bibliography of contemporary publications relating to code creation and secret writing. Professor Klüber’s first edition still survives in the German State Library in Berlin, while a copy of the publication is in the National Cryptologic Museum. 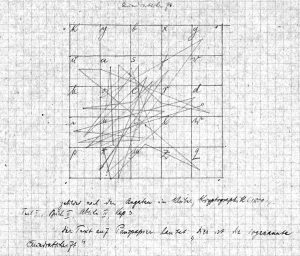 The National Archives and Records Administration is currently working to complete the processing of this important collection of National Security Agency material.  Check back regularly for updates.

Edited to add: To see an update of the NSA’s press release, click here.

One thought on “After 200 years, a glimpse into The Art of Secret Writing”