Today’s post is written by Onaona Guay, a processing archivist in College Park.

For those of us who lived through September 11, 2001, we will always remember where we were when our nation came under attack.

9:50 am.  I was just returning to our off-campus house from my first class of the day when my roommate called out in a trembling voice, “Two planes just flew into the World Trade Center!”  I remember not being able to comprehend that statement.  I remember thinking, “Surely, I misheard her.” And I remember being in shock when I saw the live footage of both towers in flames.  We watched in tearful silence as the South Tower, and then the North Tower, collapsed.

On the ten-year memorial of the September 11 attacks, I find myself with the venerable opportunity of processing the records of the American Red Cross September 11 Recovery Program [SRP].  In the spring of

2002, as the massive September 11 disaster relief operation wound down to a close, the September 11 Recovery Program was established as a long-term temporary unit of the American Red Cross Disaster Services.  Financed largely through the Liberty Disaster Relief Fund, the SRP focused specifically on assisting the families affected by the terrorist attacks.  Over the course of the program, the SRP received thousands of letters, cards, booklets, posters, banners and artifacts from concerned and affected individuals—children and adults alike—expressing their sympathy and grief for the victims of the attacks and their families, as well as their gratitude to the rescue and relief workers and volunteers.  Most of the records in this series are handmade ephemera.  Even ten years later, I marvel at the outpouring of support, encouragement and love from individuals around the world.

Due to the volume of items received by the September 11 Recovery Program, Red Cross archivists decided to retain a representative sample of the ephemera before distributing the items to the intended recipients.  These retained items now have a permanent home at the National Archives.

The vast majority of the records in the September 11 Recovery Program series are from children.  Cards, letters, drawings, paintings, posters, booklets, bracelets, teddy bears, handcrafted pins, magnets, postcards—just to give a few examples—arrived from around the world.

Many were created as a part of a school or class project.  First- and second-graders at J.F. Kennedy Elementary School in Wisconsin joined “hands and hearts with New York City” through these creative posters:

Students at Leighton Elementary in Aurora, Ohio were “deeply moved by the many signs of a nation coming together to help those in need.” Wanting to contribute, and inspired by a news story about “how quickly workers gloves needed to be replaced, as shards of glass and metal reduced them to rags within hours,” the students created cards and decorated gloves for rescue and clean-up workers, a project they called “Hero’s Hands.” 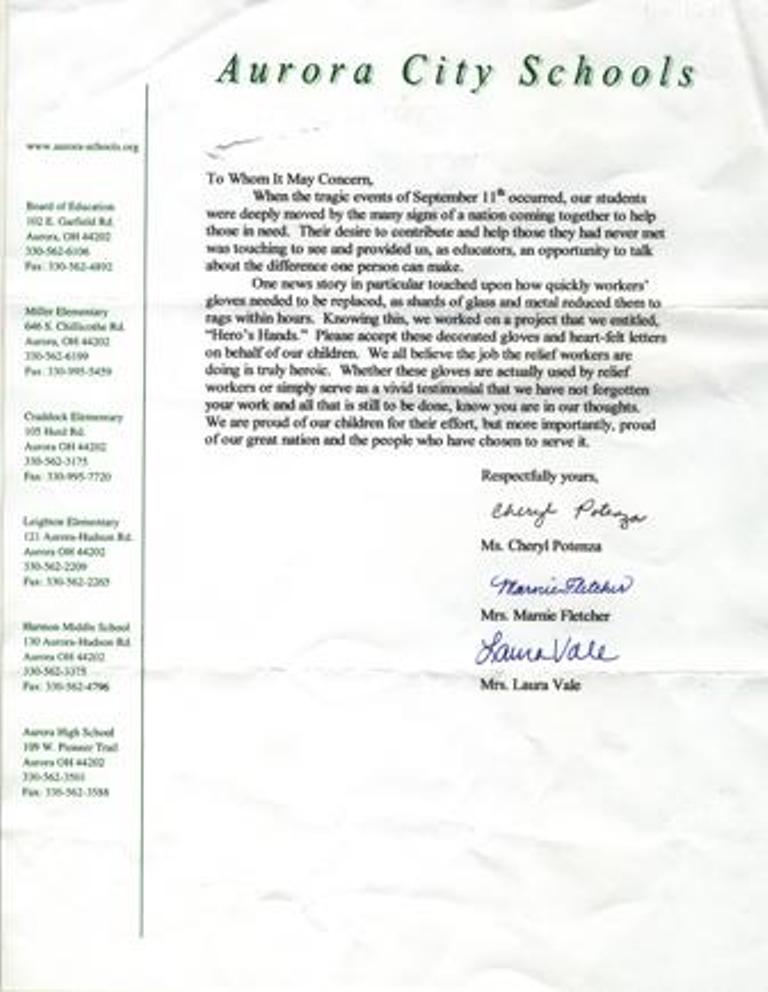 A few children initiated projects themselves, encouraging friends, family and community members to join them in expressing their support and gratitude.  Twelve-year-old Michelle Kidd of Mt. Prospect, Illinois organized a nationwide project entitled “H.E.A.R.T.S. [Helping Every American Recover Together through Solidarity] Across America,” which encouraged kids across America to demonstrate their gratitude to the heroes of September 11 by creating a card and accompanying pin.  “These pins are a symbol of our love to you, our country and to those that lost their lives on September 11, 2001,” Michelle writes.  “This token of love is sent from our hearts in hopes that it warms your heart.” 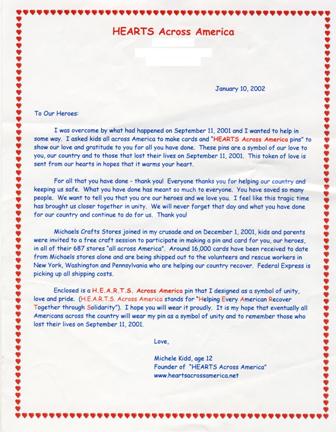 Some children wanting to express their sympathy and offer comfort looked for small ways to contribute.  Sarah, Samantha and Sirena Miller, with “a little help from mom,” created an impressive amount of stuffed teddy bears, each wearing a small scarf and adorned with a hand-stitched heart.

Jessica Joyner of Pensacola, Florida sent the Red Cross a variety of items, including a handmade paper fortune teller (that timeless ephemera), which was her small way of doing “something special,” and the letter that follows beneath it. 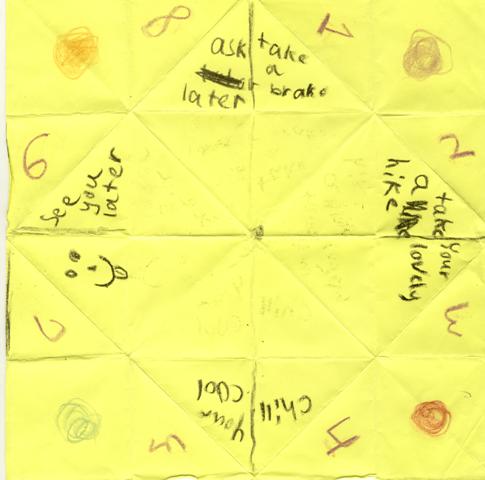 Yuri Oka also felt compelled to help, though via less conventional means.  Her mother sent the Red Cross a copy of the letter Yuri wrote to the tooth fairy, explaining:

This is a copy that my daughter, Yuri (9), wrote to a fairy on the night she lost her tooth.

I asked her to look at her letter, and I found her feeling about the tragedy.  It touched me to the heart and I thought many many kids felt and sympathized like this all over the world.

Please let me send the letter that I copied before Yuri had put it in her bed room and a fairy took it away.  We are not alone.

Though some of the text on the copy of Yuri’s letter that the Red Cross received is cut off, the sentiment rings loud and clear: 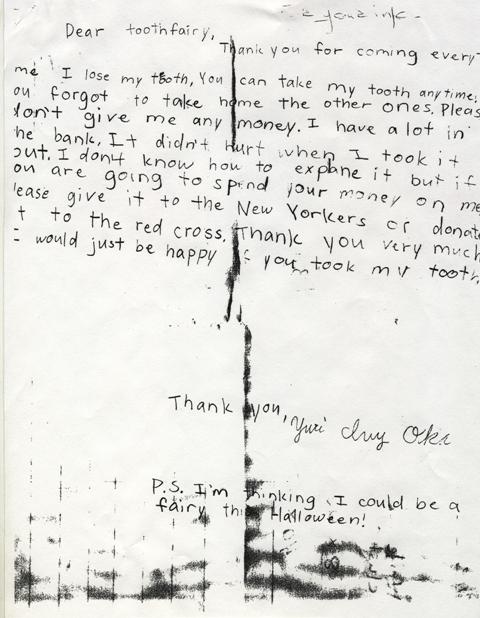 Thank you for coming every-time I lose my tooth.  You can take my tooth anytime.  You forgot to take home the other ones.  Please don’t give me any money.  I have a lot in the bank.  It didn’t hurt when I took it out.  I don’t know how to explane [sic] it but if you are going to spend your money on me, please give it to the New Yorkers or donate it to the Red Cross.  Thank you very much.  I would just be happy if you took my tooth.

P.S. I’m thinking I could be a fairy this Halloween!”

These simple and sincere messages, though heartfelt, often reveal that most children were struggling to comprehend the severity of the attacks and their aftermath.  Many relate the attacks to a personal event in their lives—the death of a loved one or an unpleasant activity such as cleaning their room—in attempt to understand what happened. 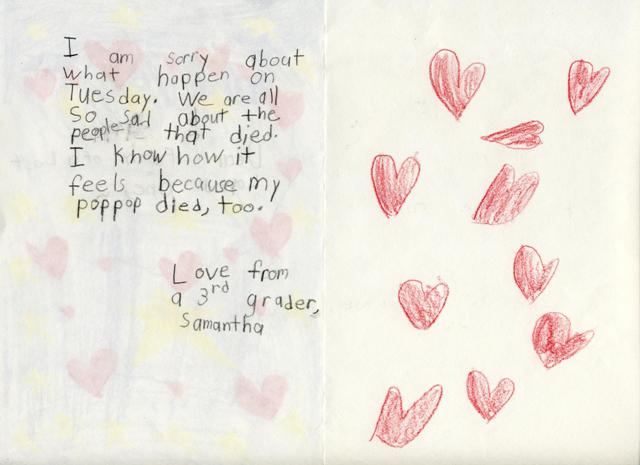 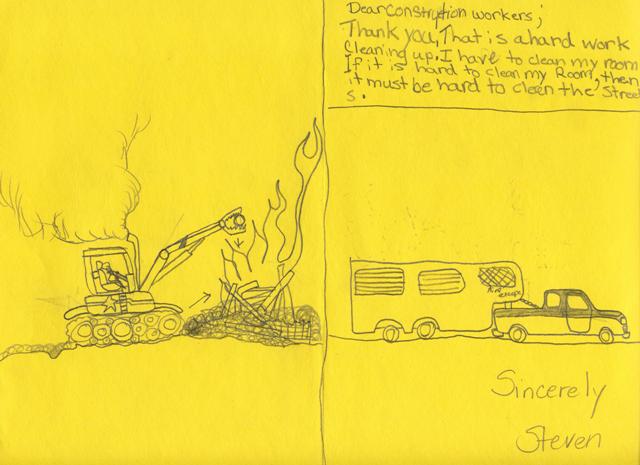 Many more, however, express an innocent desire for a world free of pain and sadness, for a world full of peace and happiness.  Sometimes it is a refreshing reminder to see the world through the eyes of a child.

2 thoughts on “September 11 Through the Eyes of Children”