Today’s post is written by Onaona Guay, a processing archivist in College Park.

The American Red Cross September 11 Recovery Program received many gifts of compassion and sympathy from people around the world: cards from Australia, letters from Romania and Indonesia, drawings from Belize, postcards from Hong Kong.  Students, faculty and staff of Ecole Routhier School in Falher, Alberta sent a signed Canadian flag “as an expression of sympathy and compassion for the victims of the terrorist acts of September 11th.”  In solidarity, they write that “Canadians and American both have a strong resolve, and your country will grow better and stronger in proving that human foundations are stronger than just buildings.” 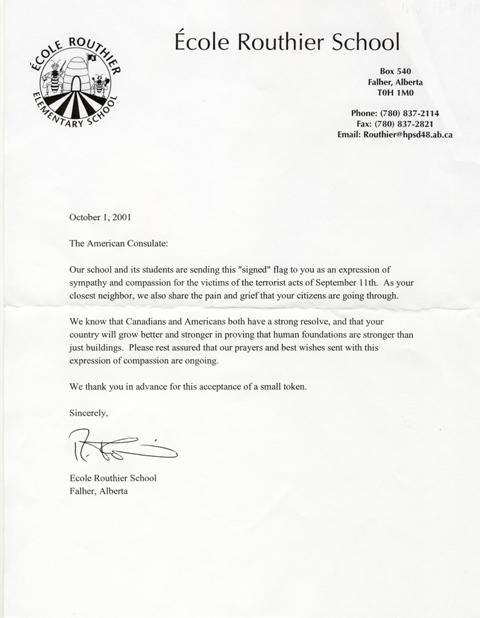 Students in Japan presented the Red Cross with one-thousand origami cranes, a custom known as “Senbazuru.” In Japan, the act of folding 1000 cranes—a symbol of luck and longevity—embeds the creator’s wish for the recipient in each origami bird.  Thus, “Senbazuru” is essentially a gift of 1000 wishes for recovery and happiness.  Strings of origami cranes were a common sight outside of St. Paul’s Chapel, a small church near Ground Zero that became a popular memorial site to those who were lost in the attacks.