Today’s post is written by Cody White, Archivist at the National Archives at Denver.

Nearly 50 years ago on June 29, 1967 an airplane landed at Hall’s Crossing near the upper end of Utah’s Lake Powell. On hand to meet the plane was San Juan County Commissioner Calvin Black who presented two Navajo blankets to the distinguished guests who disembarked, Utah Senator Frank Moss and New York Senator Robert Kennedy.

After the presentation, Moss led his large party of guests including Senator Kennedy and his wife Ethel, seven of their 11 children, and Eunice Shriver along with several of her children on a tour of Lake Powell, taking in Rainbow Bridge National Monument and Glen Canyon Dam before the Kennedy’s continued on a four day, 90 mile raft trip to Phantom Ranch at the base of the Grand Canyon. This family vacation, by virtue of Kennedy’s status and the locale, can today be relived within the records held by the National Archives at Denver.

To preface the trip, let’s go back nearly 120 years ago. Rainbow Bridge, a 290 foot tall, 275 feet wide rock span that neighboring Indian tribes had long considered sacred, was designated a National Monument in 1910 by President Taft but was remote enough that only hardy travelers made the trek, including former President Teddy Roosevelt shortly after the dedication. That would all begin to change in the 1950’s when the U.S. Bureau of Reclamation became involved in the area.

The U.S. Bureau of Reclamation was established in 1902 and is the federal agency responsible for the massive water management projects, including the famous Hoover Dam, that dot the western United States. Outside some specialized holdings such as films, electronic files, still pictures, and oversized maps held at the National Archives at College Park, the entirety of Record Group 115, Records of the Bureau of Reclamation, are held here at the National Archives in Denver and this is where the photographs detailing the Kennedy family’s trip can be found.

On April 11, 1956, the Colorado River Storage Project was authorized by Congress and the key piece to the project was the Glen Canyon Dam, the location chosen shortly thereafter to be in northeastern Arizona.

The last of the concrete was poured on September 13, 1963 and the dam was complete, reaching a height of 710 feet. The reservoir created by the dam was named Lake Powell and its estimated 186 mile length and 1,960 miles of shoreline would make it the second largest reservoir in the United States, behind Hoover Dam’s Lake Mead further down the Colorado River. But the reservoir filling was in limbo, in large part because of Rainbow Bridge National Monument which was threatened with inundation. 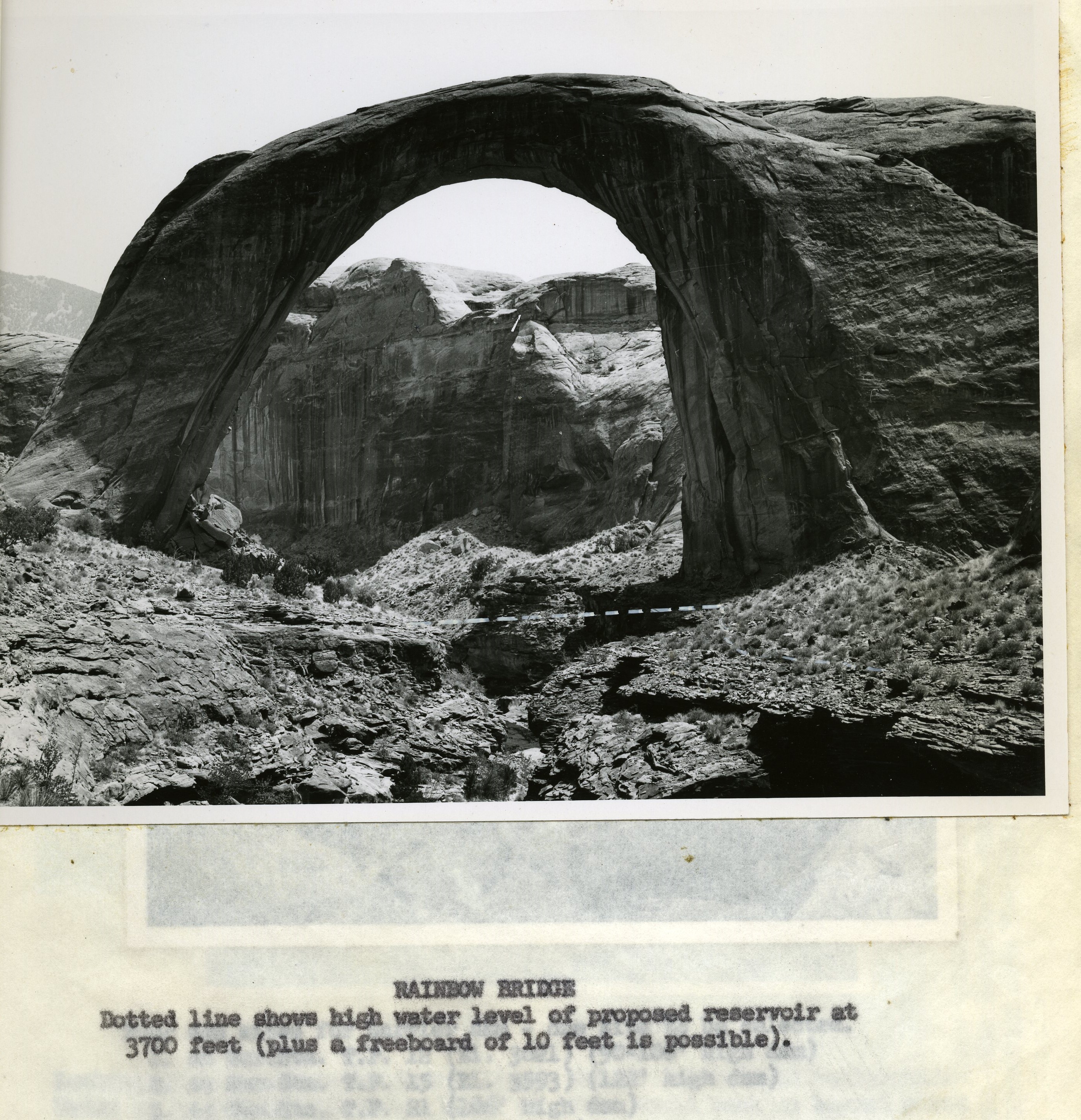 The two agencies settled on the idea for a diversion dam, at one of four selected locations, to prevent the lake from traveling up to the monument. Congress initially approved the funds but within a few years balked at the cost and the efforts were defunded, in part with the help of Senator Moss. There would be no preventing the water from flowing underneath the arch once the reservoir filled to capacity and the proximity of the water’s edge up until then would also bring with it another flood, that of tourists, to the now much more accessible natural wonder, including the Kennedy family in 1967.

The joy on the faces of the Kennedy’s would be relatively short lived, within a year the young Senator would be dead, felled by three bullets from an assassin. Senator Moss would continue on in the Senate until his 1976 defeat by Republican Orrin Hatch, who still holds the seat today.

All information comes from the following series held at the National Archives at Denver:

Additional information is also found in “A Bridge between Cultures: An Administrative History of Rainbow Bridge National Monument” By David Kent Sproul, and the official Bureau of Reclamation webpage on the Glen Canyon Unit.