As the election of 1960 approached, President Dwight Eisenhower made a unique suggestion to Secretary of State Cristian Herter.  In a telephone conversation on the afternoon of October 31, General Andrew Goodpaster, Staff Secretary to the President, informed Herter that the President recommended inviting the foreign diplomatic missions (embassies and legations) in the United States to observe election procedures.[1]  Goodpaster informed the Secretary of State that President Eisenhower realized that some embassies might specifically aim to report voting problems, but “even that would be a plus because we had permitted it to be observed and we are trying to effect improvements.”  To implement the President’s desire, Herter sent the following letter to 87 foreign missions in the U.S.[2]

Even though the Department issued the invitation only seven days before the election, many missions accepted the offer.  The countries invited and their responses are indicated on the chart that follows.[3]  Overall, the response was positive, even from those countries that did not participate.  A number of countries declined because of staffing issues (the UN General Assembly was meeting in New York City at the same time), because they saw no need because of familiarity with the U.S. and its election procedures, or planned to rely on radio and television coverage.  Others relied on consular officials already assigned to cities around the U.S.  Still others just declined. 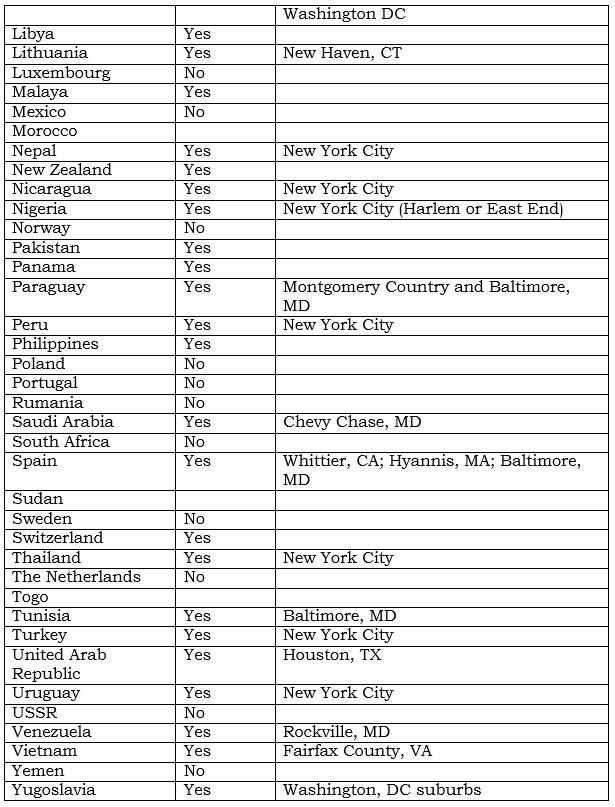 A sampling of the comments made by the foreign missions in replying to the Secretary’s invitation include the following:[4]

We have been doing this in the past, but this time we shall seek to have an even wider coverage because we believe the forthcoming elections [sic] to be one of the most important in the history of this country and, for that matter, of the world. (Embassy of the Philippines)

It is with great pleasure and gratefulness that we accept this offer to have an opportunity to observe democracy in action in this great country. (Embassy of Tunisia)

. . . I do not believe that the course contemplated is applicable or necessary for, as you know, Canadians generally are especially familiar with your procedures and, traditionally, United States elections are followed very closely by the Canadian public and widely reported in Canadian newspapers, television, and radio. (Embassy of Canada)

Observing how election procedures are carried out in this country will be very valuable to foreign representatives. (Embassy of Jordan)

This might be useful to give a better knowledge of the technique of your electoral organization, while we are, of course, fully aware of the fairness and freedom of your procedures.  (Embassy of Italy)

. . . the proposal certainly contains many elements of great interest to all who are dedicated to the democratic ideal . . . . (Embassy of South Africa)

. . . it is with special interest that we avail ourselves of this opportunity to observe these procedures, since we are proud of the fact that Venezuela has recently made great progress in the exercise of representative democracy, and all Venezuelans, regardless of their political creeds, are determined to maintain this principle in our country, and to cooperate, within the Interamerican System, in order to achieve democracy and freedom in our Hemisphere. (Embassy of Venezuela)

. . . I know that public opinion in the Netherlands is so well acquainted with the democratic election methods followed in the United States of America and is so convinced of the fairness with which elections are conducted in this country, that it would be appear superfluous for [the embassy to participate]. (Embassy of the Netherlands)

. . . the Embassy has no plans to send its representatives to observe election procedures during the forthcoming elections in the United States. (Embassy of the USSR)

. . . we are also aware of even certain difficulties in pre-election procedures in some parts of the country, as such problems are fully aired in the American press and openly discussed in an earnest effort to have them duly corrected.  Nor can we fail to appreciate the steady progress that has been accomplished in this respect.

Actually, the President’s suggestion constitutes but a fresh confirmation of the correctness of the Greek people’s view of the American elections and of their unwavering faith in American democracy. (Embassy of Greece)

The final results of the program are summarized in the following memorandum sent to Malcolm Moos, Administrative Assistant to President Eisenhower.  In his cover letter, which also enclosed six photographs, Theodore Achilles, the Counselor of the Department of State, summed up the results this way:

Notwithstanding the incident in Atlanta involving the Ghana First Secretary and the critical comments of one or two Western European diplomats, I think there is no question that on the whole the President’s suggestion was well received throughout the diplomatic colony here, and that in taking advantage of the suggestion, many diplomats gained an insight into American election laws and procedures that they could not otherwise have attained.[5]