Today’s post is written by Daniel Dancis, an Archivist in the Textual Processing Branch at the National Archives, College Park.

Antonio Arias Bernal, an accomplished Mexican political cartoonist, came to Washington, D.C. in 1942 at the invitation of the U.S. government to create editorial cartoons to promote the Allied war effort. Prior to being invited, Bernal was known for artwork that ridiculed the Axis leaders which regularly appeared on the cover of the Mexican magazine Hoy. His trip to Washington was organized by the Office of the Coordinator of Inter-American Affairs (CIAA), a World War II era agency established to promote solidarity and cooperation among the countries of the Western Hemisphere. Primarily concerned with economic and commercial cooperation, the agency also worked to shore up political and cultural support through propaganda messages conveyed in radio, motion picture, and print outlets. Bernal’s contribution came in the form of posters.

“Posters,” said Señor Bernal, “reach the thousands of our people who do not read but who can understand quickly a dramatic picture.”

Señor Bernal reported that in 1938 he perceived a certain trend to divide the Americas and began to devote his art to unification. At first, he said, he received many anonymous threatening letters, especially after any of his cartoons attacked Hitler. Gradually the number of these letters decreased as sentiment in Mexico became more nearly solidified against the Axis.

Now, he said, he receives none, but he believes that there is still need in Latin America for posters and cartoons showing graphically the issues at stake in this war. [1]

In the image above created by Bernal for the CIAA, a colossal sentry, armed with a rifle, literally emerges in equal parts from North and South America. Below him, the words in Spanish “Como un Solo Hombre” (As One Man), reinforce the meaning of the illustration: the Americas stand united against a common enemy.

CIAA posters generally conveyed the theme of American unity or Allied victory.[2] In the following additional examples created by Bernal, the leaders of the Axis countries are portrayed as bumbling cartoon characters when confronted with the united strength of the American republics.

In the example above the muscular figure with the sombrero on his back represents Mexico (upper left, center); the U.S. is represented by the other large figure in a G.I.’s helmet (upper right). In the middle ground a silhouette of a factory represents the combined industrial strength of the two nations. In the foreground, caricatures of Mussolini, Hitler, and Hirohito look up in fear and awe.

Arias Bernal’s posters distributed by the Office of the Coordinator of Inter-American Affairs throughout Latin America from the series World War II Foreign Posters, 1942-1945 (NAID 516330).

At the National Archives in College Park, MD the records of the CIAA are found in Record Group 229, Records of the Office of Inter-American Affairs (OIAA – as CIAA was known after March 1945). However, in the case of Arias Bernal, more details about him and his trip are found in the series General Records, U.S. Embassy, Mexico, 1937-1963 (NAID 1676970) from Record Group 84, Records of the Foreign Service Posts of the Department of State. Here, in file “820.02 Propaganda Project: Arias Bernal’s Trip to Washington” (NAID 74618203), the story of Bernal’s trip comes to light through correspondence between officials from the Department of State in Washington, the American Embassy in Mexico City, and the CIAA. The records in this file provide a picture of Bernal as he was viewed by American officials, details about his personal life, and information regarding preparations made for his trip and project. In addition, the file provides an opportunity to see the workings of American foreign policy at the time.

The narrative begins June 16, 1942 when the Department of State submits the CIAA’s project authorization for Mr. Bernal’s trip to the American Embassy in Mexico for comments and recommendations. The project authorization lays out such details as costs (not to exceed $2,750), duration (six weeks), work space arrangements and supplies (office, desk, chairs, etc.), and the objectives of the proposed project (distribution of editorial cartoons in the American republics). In addition, it makes clear that the CIAA will suggest to Mr. Bernal the subject matter for the cartoons. The terms of the project have been negotiated and agreed to in advance with Mr. Bernal. 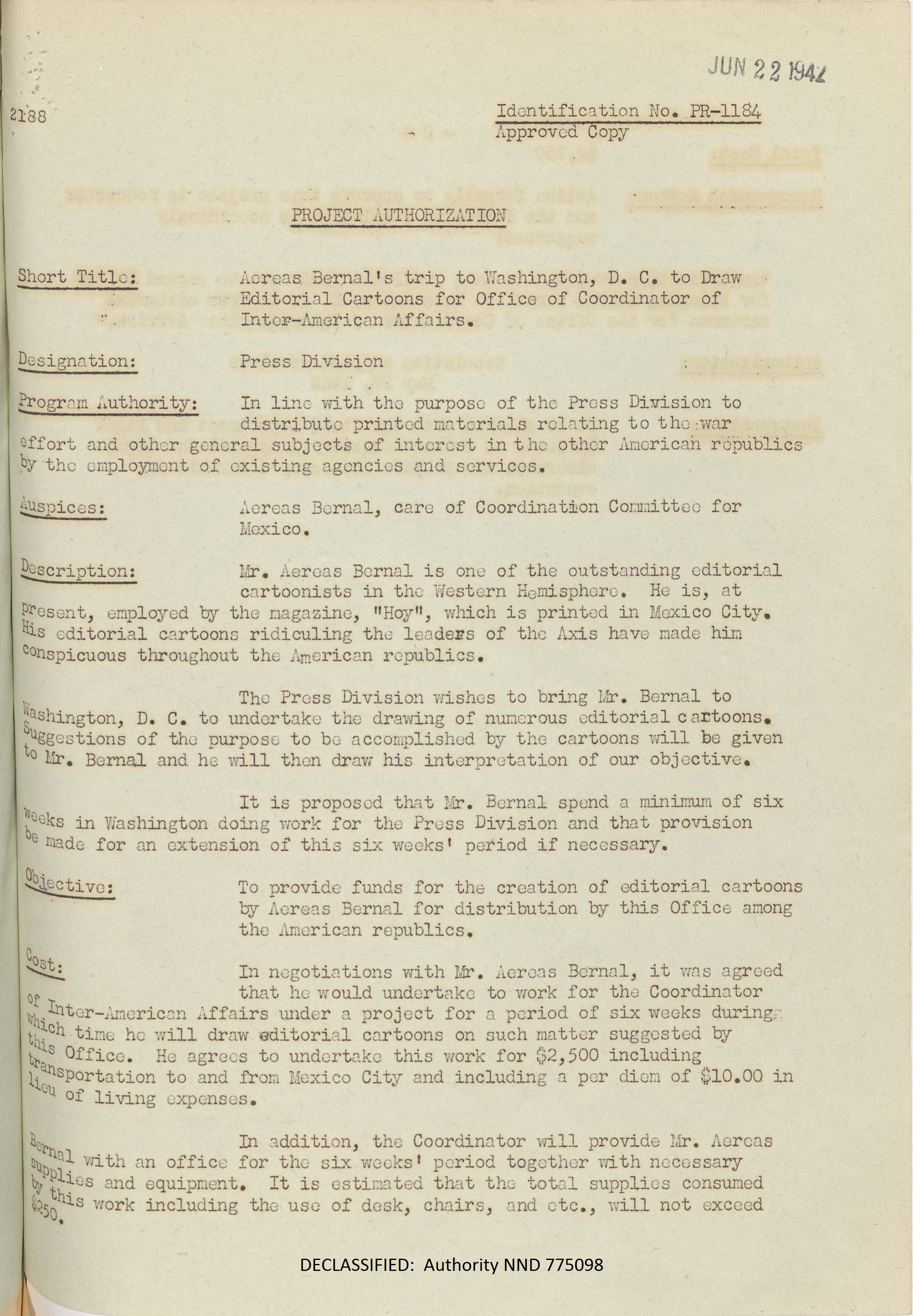 July 1, 1942: The Embassy responds that it has no objections to the project and informs the Department of State that it has been in touch with Mr. Bernal regarding the trip. In addition, they pass on that he is recently married and has been too busy with his regular work to begin the posters for the CIAA, yet he wants to go and is waiting for a formal invitation.

July 14, 1942, (received July 21): Nelson A. Rockefeller, the Coordinator of Inter-American Affairs, writes to George S. Messersmith, the American Ambassador to Mexico, regarding the project and describes the steps taken to inform relevant parties and to get Department of State approval for CIAA initiatives. He writes that preliminary inquiries about hiring Mr. Bernal were made to the Embassy in February and March.

July 16, 1942: Two weeks after giving its initial comments in support of the project, the Embassy receives word from the State Department that questions have been raised about Mr. Bernal’s opinion of the United States. It seems that some view his cartoons and the magazine Hoy as anti-American. The Embassy is asked to look into the matter.

July 17, 1942: After consulting with people knowledgeable about local public relations, Ambassador Messersmith responds to the State Department that the Embassy finds nothing anti-American in Mr. Bernal and his cartoons. On the contrary, “Bernal’s cartoons are strong and effective anti-Axis and pro-Democratic propaganda. Bernal has an unusual punch as a cartoonist; he is very bohemian; . . . the Embassy sees no reasons why his cartoons should not be used by the Office of the Coordinator.”

July 28, 1942: With the project authorized, the CIAA’s Press Division in Washington, responsible for hiring Mr. Bernal, writes to the Coordination Committee in Mexico, which is the CIAA’s local representation, to begin making arrangements to get Mr. Bernal to Washington and to extend to him any courtesies necessary to expedite his travels.

August 10, 1942: Coordinating Mr. Bernal’s travel is Guy W. Ray, Second Secretary of Embassy, Mexico, who writes to the Department of State to inform them that Mr. Bernal and his wife are scheduled to fly to Washington via Brownsville, arriving August 23. Their accommodation in Washington is still up in the air and Mr. Bernal, viewed as naïve, does not speak English, but Mrs. Bernal, a lawyer and only 22, has left quiet an impression.

August 24, 1942: Nelson R. Park, the American Consul at Matamoros, Tamaulipas, at the Mexican-American border across from Brownsville, Texas, meets Mr. and Mrs. Bernal at the airport and, along with U.S. Immigration and Custom Officials, provides them with expedited assistance on the second leg of their trip to Washington (August 23). Coincidentally, the Colombian Ambassador and his wife arrived at Brownsville on the same plane as the Bernals, so the American Consul also saw to it that they received special treatment to get to their destination.

October 6, 1942: Mr. Bernal makes a positive impression in a press interview organized by the New York office of the CIAA’s Press Division. Francis A. Jamieson, the director of the Press Division, is in a congratulatory mood.

(The entire file is available to view in the National Archives Catalog at NAID 74618203).

By November 1, 1942 Antonio Arias Bernal was back home in Mexico.[3] The posters he made for the Office of the Coordinator of Inter-American Affairs were distributed in the following years in large numbers throughout Latin America.[4] By all accounts, Arias Bernal’s trip to Washington was a success.

A few additional graphic works created by Bernal for the CIAA are included below from the holdings of the National Archives. Unlike the posters displayed above, these do not have the CIAA’s name printed on their front which leads to the conclusion that ultimately these five posters did not get selected for distribution.

Special thanks to Greg Bradsher for helping find the records in RG 84; David Langbart for suggesting Monica A. Rankin’s book; and Nick Natanson and Richie Green for assistance in the Still Pictures Branch.