As a Florida native, growing up,  we would track the path of the various hurricanes and tropical storms that were predicted to hit, cross or barely touch the state. In the late 20th and current 21st centuries we have satellite which warn us and show us serious weather patterns as they move across the globe. In 1935, there was no Doppler radar, no Weather Channel reporters, only a few ships at sea and reports from the islands, and the lack of information about the intensity of the storm that came killed over 400 people in Key West.

Monday evening on September 2, 1932 a category 5 hurricane bringing winds and water hit the Florida Keys, destroying three veteran’s camps. There were over 600 veterans stationed there to for a work program, associated with the Federal Emergency Relief Administration (FERA), and 262 of those veterans died and many more were injured.  On September 4th, President Franklin D. Roosevelt requested the Veteran’s Administration to act jointly with FERA to investigate the matter. Later the Seventy-Fourth Congress held hearings in the early part of 1936, for H.R. 9486, “A Bill for the Relief of Widows, Children and Dependent Parents of World War Veterans Who Died as the Result of the Florida Hurricane at Windley Island and Matecumbe Keys, September 2, 1935.” Representative J. Hardin Peterson of Florida stated at the hearings, “There were three objectives in my mind: One, to fix responsibility, if possible, for the loss of the lives; second, to provide relief for the dependents of veterans; and, third, to provide some simple liberal method of providing death, for the purpose of getting the veterans’ benefits, benefits by which the veterans might be entitled to relief under other veterans’ legislation, or under such legislation as might be passed along that line.”

The series Investigative Files Regarding the Labor Day Hurricane of 1935 (NAID 1661966), in Record Group 15: Records of the Department of Veterans Affairs, 1773 – 2007, contain memos, transcripts, reports, fact sheets, photographs, weather reports, and information regarding aid to survivors and victims’  families. The reports, which are several volumes, center around the activities of the particular investigators assembling the report, so interviews and statements are not in any one particular order. Some reports and other documentation show an attempt to account for veterans, locate missing persons, identify the dead, and note next of kin.

In the statements and transcripts found in reports and files come from a variety of persons, high and low. In reading the interviews one could quickly infer that investigators were attempting to find negligence on the part of state or federal officials for the natural disaster. The Weather Bureau, Frederick B. Ghent, Director of the Veteran’s Camps for the State of Florida, and Ray W. Sheldon, Assistant Director of the Camps, were all under intense scrutiny for their actions before and during the hurricane. In an interview conducted by Aubry Williams with Eugene A. Pattison, a field engineer at the camp, Patterson mentioned that because of various conditions and the weekend situation, the men were in no position to remove themselves. Other  interviewees include Weather Bureau and Florida East Coast Railroad personnel, camp supervisors, residents, and men from the camps.

In a memorandum dated February 26, 1968 for a request to review the report regarding the disaster refers to a statement made by one of the investigators, “But as I went over the thing, step by step and move by move, on the part of all the responsible persons, I came to the absolute conclusion that it would be a gross miscarriage of justice to say that anybody failed.”  However another investigator is mentioned in this same memo whose conclusions were, “highly critical of the actions of FERA officials.” So it is advisable to note which investigator is which when reviewing the reports and interviews, as they came to very different conclusions regarding responsibility. 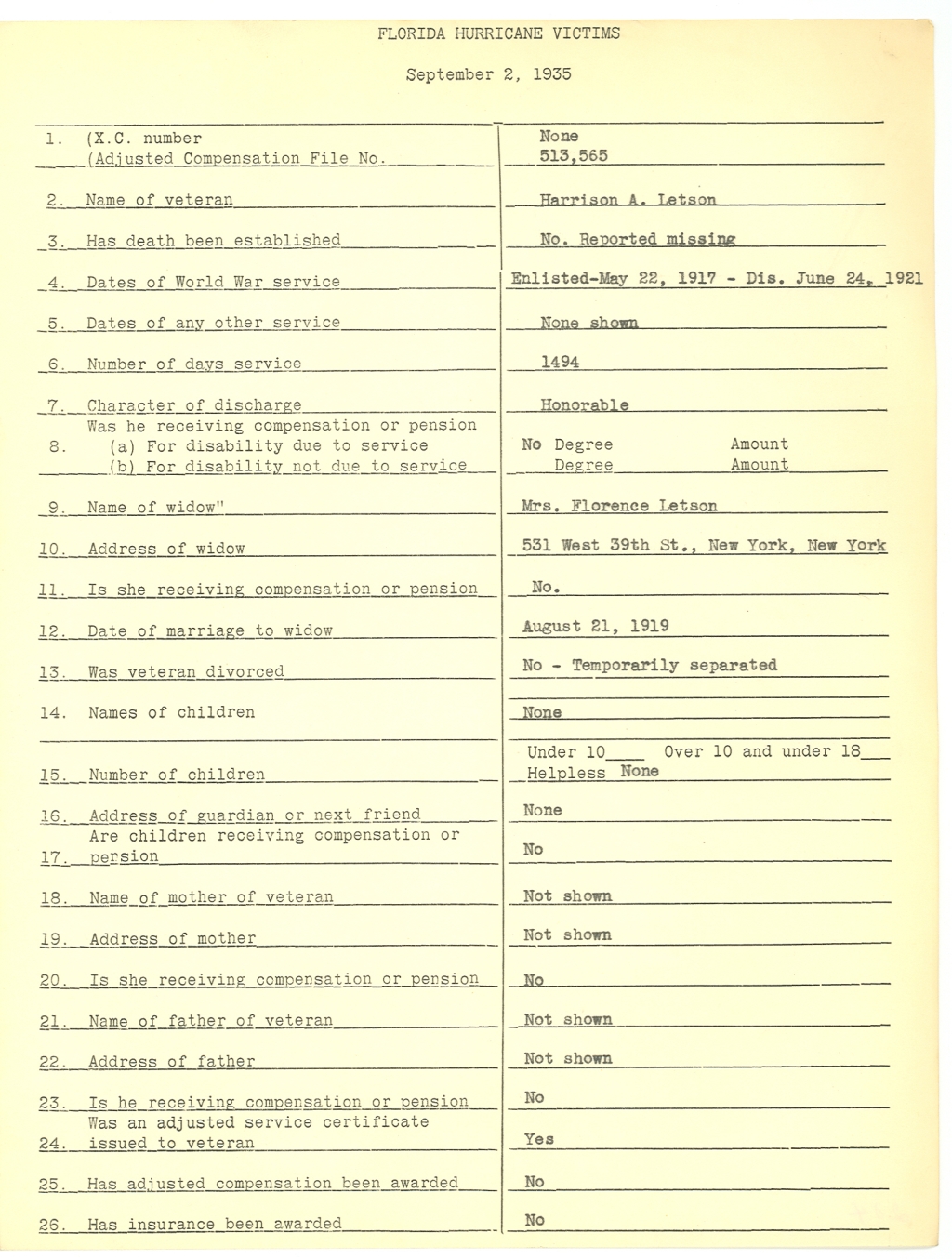 There are two types of researchers who may find great use from this investigative series, genealogists and persons studying the history of the government’s handling of natural disasters. The interviews are not only of officials but of veterans and Key West residents. The forms for compensation of  Florida Hurricane Victims is more wide reaching and when the data is there, provides information about children, dates of service,  and next of kin or “next friend”.  Several veteran victims were divorced and the names of their ex-wives sometimes do appear in the forms, and scant information about the divorce may be included. For the researcher studying the government’s reaction to modern day natural disasters, this series document’s and examines the roll of the government, asking what it could have done to prevent damage and loss of life and how quickly it moved to locate the missing, compensate victims, and seek out blame. There is an index for names of men who where in the camps in Index to Veterans Regarding the September 2, 1935 Hurricane’s Destruction of Veterans Camps (NAID 1662139, HMS/MLR A1 19), there are names of  veterans, which may help determine if there is more information in the investigative files. 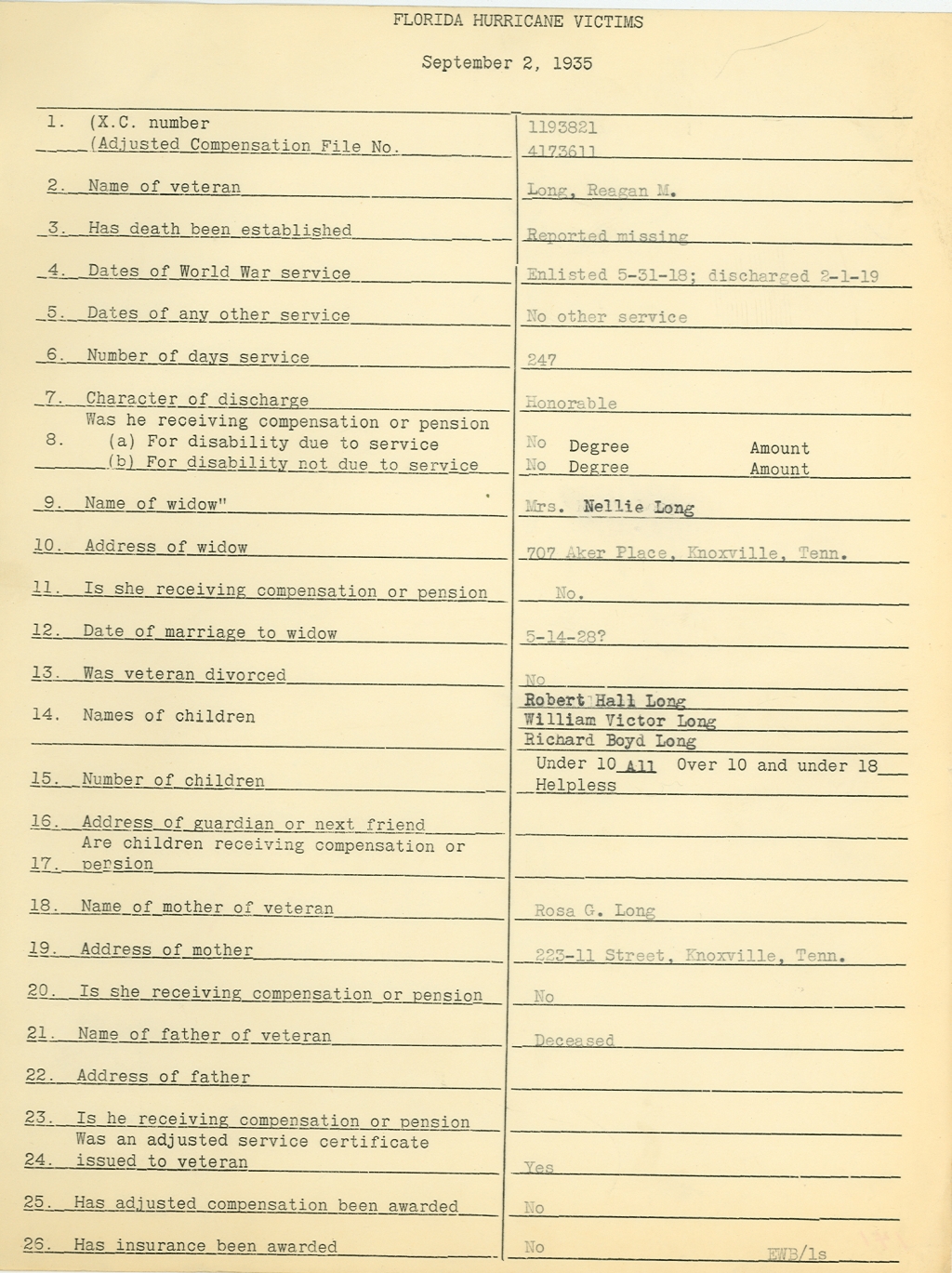 See also Plumage of Pomp: The Labor Day Hurricane of 1935