Today’s post is written by M Marie Maxwell, an archives specialist who works at Archives I.

Recently, as a citizen, I attended a local community meeting regarding a contentious proposal, hosted by a city government department. Besides the subject being contentious, attendees against the proposal and the city representatives did not agree on how to voice the attendees’ wishes. The attendees against the proposal wanted to stand and individually speak on why they opposed what the government was planning. The city representatives wanted attendees to fill out feedback forms. The proposal opponents claimed the forms would just go straight to the trash.

And I immediately thought, “No, they wind up in the archives.”

In my years of processing, I have come across letters, petitions, and other records of citizens’ opposition or support buried among the federal records. It is not uncommon for federal agencies to have a comment period, where comments from the public are solicited regarding a rule, a project, or changes.

Of the records I have worked with, the voice of the public is found amongst other documents, as with the letters found in RG 328 Records of the National Capital Planning Commission Development Proposals Project Files, ca. 1970 – 2000 (NAID 2765725) in the files concerning the National Harbor, also known as Smoot Bay, and Port America. There are several boxes of files relating to this project, of which the public’s comments are just one of many related topics. 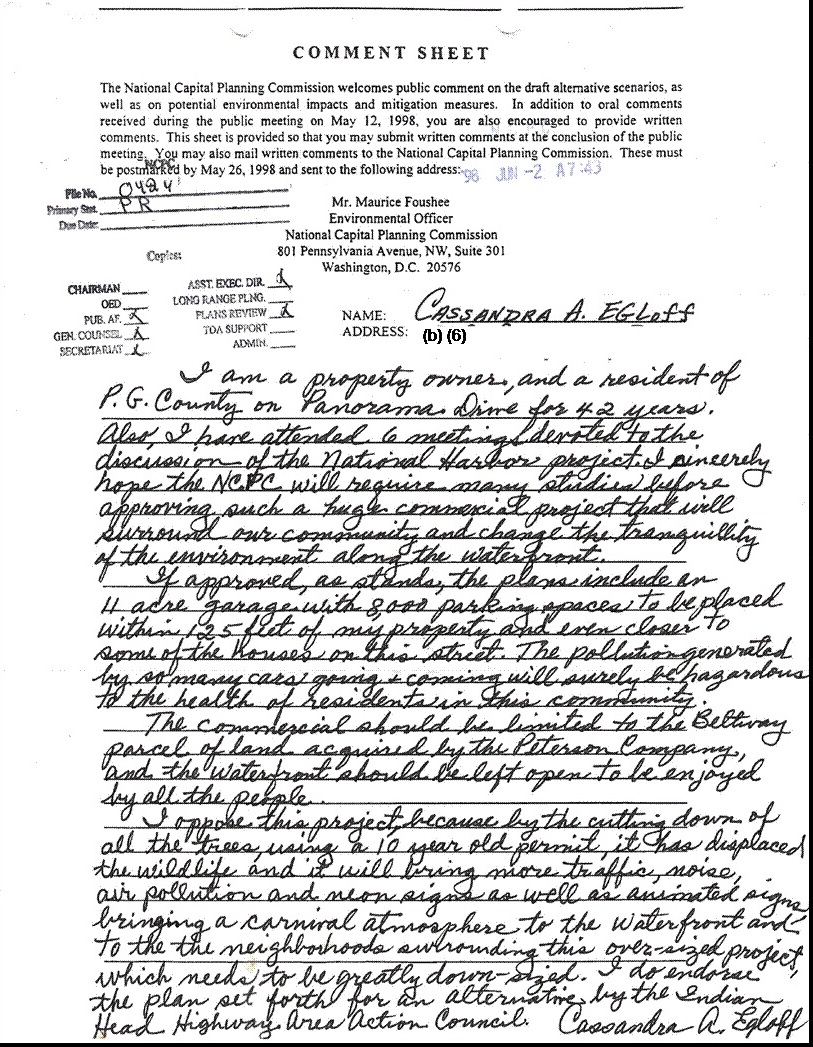 Some letters were mailed in, some faxed as a group, and there appears to have been a public meeting on May 12, 1998 where comment sheets were made available. We have one such example received by the office on June 2, 1998. The author, a longtime resident of nearby Oxon Hill, Maryland, stated she opposed the project, worried that it would bring a “carnival atmosphere” and other undesirable qualities. A large number of the letters document opposition to the project, citing concerns over traffic, the environment or other residential concerns. Looking at the other folders regarding what was proposed one can see what examples were presented which brought forth phrases like “carnival atmosphere” and “theme park,” as well as the other concerns.

The records do not say what happened between the planning and study period and the completion of National Harbor in 2008 that is for the researcher to explore and discover. Because this series contains material about private and federal projects, researchers will need to allow time for staff to screen these records. It is worth the wait as there is information about the project that won’t be found in the local newspaper, for those researchers studying how a large development starts out.

Another series with public comment came to mind of something I recently processed. The letters and postcards in RG 302 Records of the National Capital Housing Authority Segregation and Integration of Public Housing Files, 1943 – 1956 (NAID 23902751). A portion of the series documents the public’s opinion of plans to not segregate several public housing developments in the District of Columbia. While there are a few letters supporting the end of racial and religious discrimination in public housing. In Mrs. Evelyn L. Petshek’s May 7, 1953 letter she wrote, “As a resident of that area I wish to go on record deploring the [Washington Heights Citizen Association protest of non-segregated housing] and to state that I sincerely hope that this housing will be used on a non-segregated basis.” There are letters from organizations, businesses and individuals opposing the housing authority’s experiment in opening a few projects to all applicants. Several of the letters cite property values as a reason for opposition as in the example from one real estate business. Mr. and Mrs. R.E. Hobbs, mention overcrowding and strained facilities as a reason for opposition. 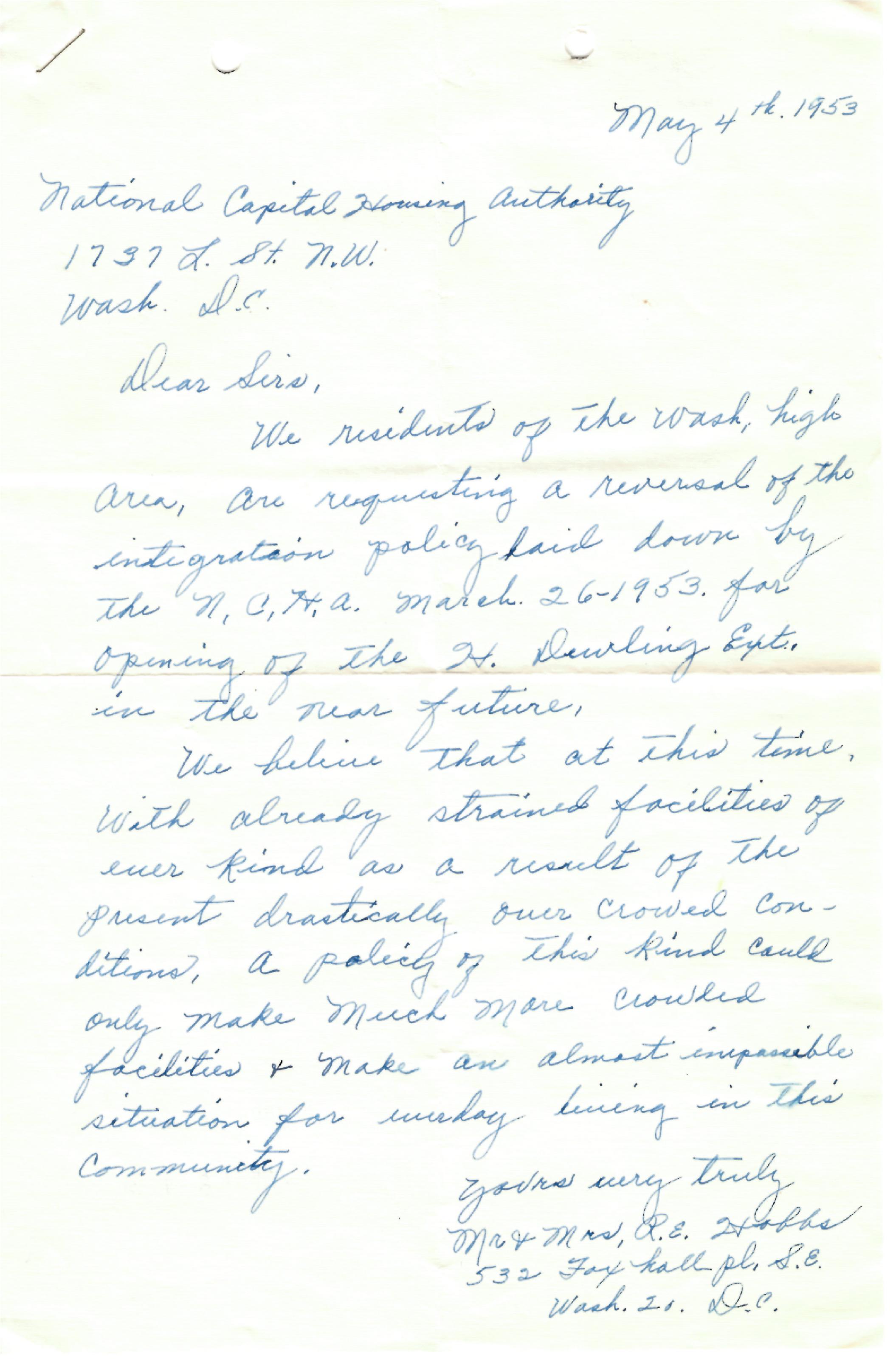 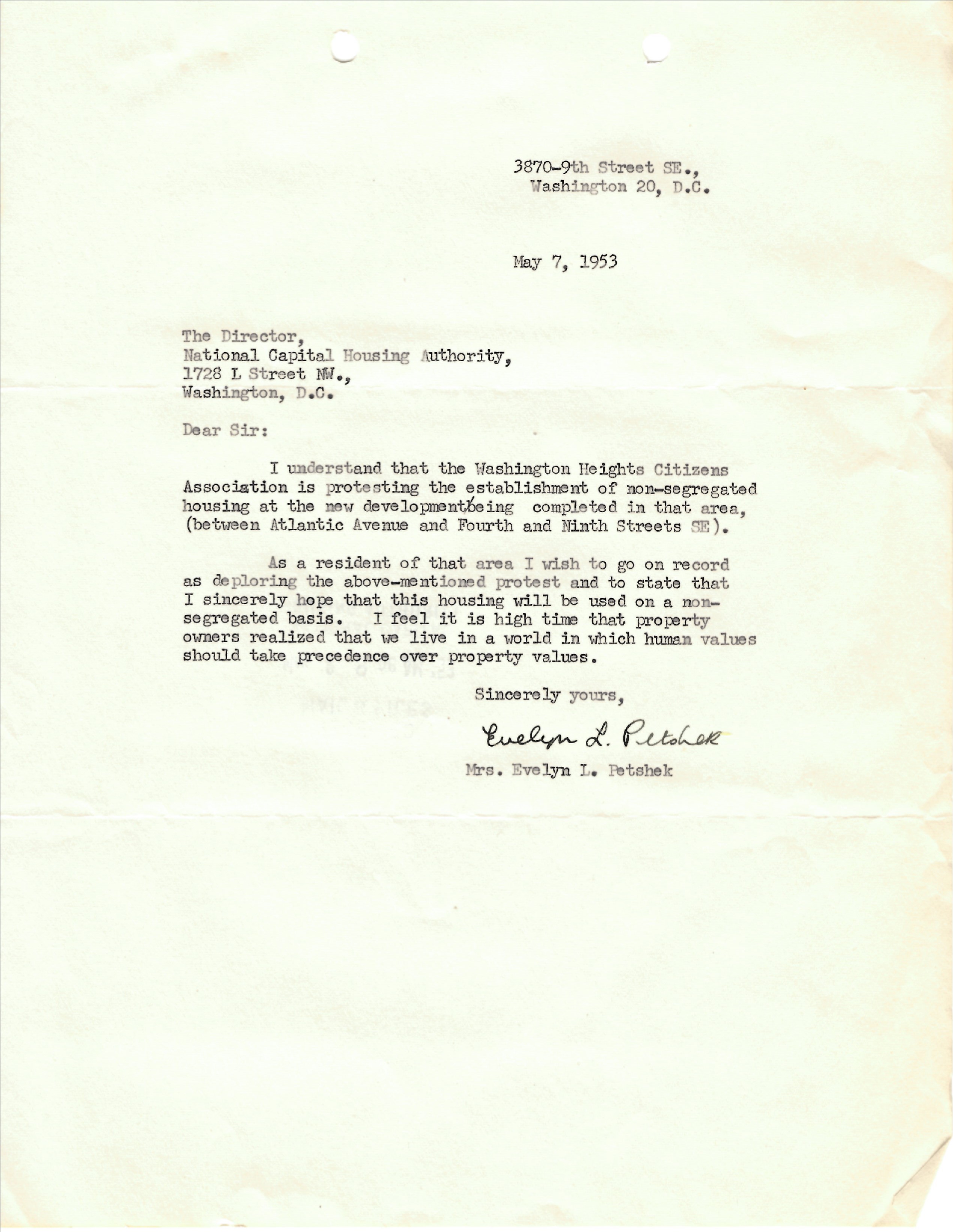 The public’s opinion, be it opposition or support, was collected and is now preserved for researchers to examine and interpret. Feedback from the public can be just one part of the information kept as part of the project or effort that the creating agency wished to document. The opinions and thoughts of those in charge of a project are better known than of the person on the street, so it is interesting when I come across the voice of the common person, regardless if I agree or disagree on what they have to say.

3 thoughts on “A Record of Protest”