After the Civil War, former Confederates moved forward with their lives. They returned to their homes, many in tatters, their plantations and farms, now without slaves, and their businesses, now in ruins. Over the following decades, many ended up working for the government of the country from which they had attempted to break. Among them was former Confederate Lieutenant General James Longstreet.

Born in South Carolina, although largely raised in Georgia, and an 1842 graduate of the U.S. Military Academy at West Point, Longstreet fought in the War with Mexico and against Indians on the frontier. He resigned from the Army in June 1861, and joined the Confederacy. He led troops in critical battles in the eastern theater – First Manassas, the Peninsula Campaign, Second Manassas, Antietam, Fredericksburg, and Gettysburg. In October 1862, having led a wing of the Army of Northern Virginia under Robert E. Lee, he was made a Lieutenant General to lead the First Corps of that army. Detached with part of his corps to go west, he helped secure the September 1863 Confederate victory at Chickamauga Creek in Georgia. He then led an unsuccessful effort to capture Knoxville, Tennessee. He and his troops returned to Virginia for the spring 1864 campaign. He was seriously wounded by his own men during the Battle of the Wilderness in May 1864. Out of action for several months, he returned to duty in October to take part in the defense of Richmond and Petersburg. He was with the Army of Northern Virginia at the time of the surrender at Appomattox on April 9, 1865.

After the war he became a partner in a cotton brokerage in New Orleans and the president of an insurance company. He involved himself in postwar Reconstruction politics and became a vocal Republican. He was perhaps the highest-ranking and most famous former Confederate officer to make such a move. Because of that act, he became a social, business, and political outcast and his business ventures collapsed. He further alienated former Confederates by criticizing some of Robert E. Lee’s decisions and actions during the war. He supported his old friend U.S. Grant for president in 1869 and subsequently secured a number of appointments from Republican political patrons. These included periods of employment as Surveyor of Customs for the Port of New Orleans, a short stint as U.S. minister to Turkey (1880-1881), and U.S. Marshal for Georgia (1881-1884). During the Democratic interlude of President Grover Cleveland, Longstreet received no patronage, but with the election of Republican Benjamin Harrison in 1888, opportunities once again presented themselves. As Harrison put together his administration, Longstreet’s name was put forward by supporters and he himself requested another diplomatic assignment.

The following are a few of the letters in the file accumulated by the Department of State as part of its responsibilities for handling appointments. In the following transcripts, some minor editing has been done to clarify paragraphs or otherwise make reading easier. 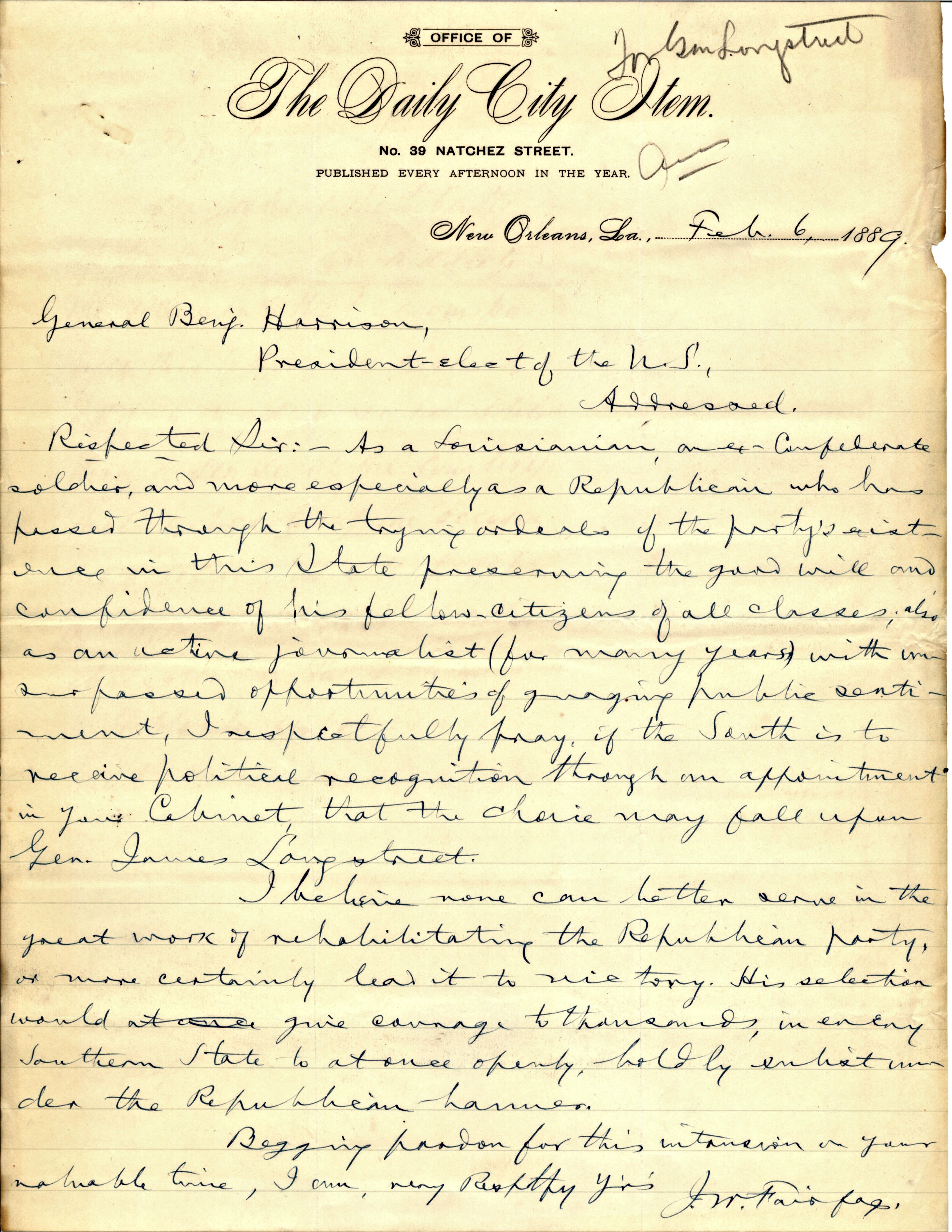 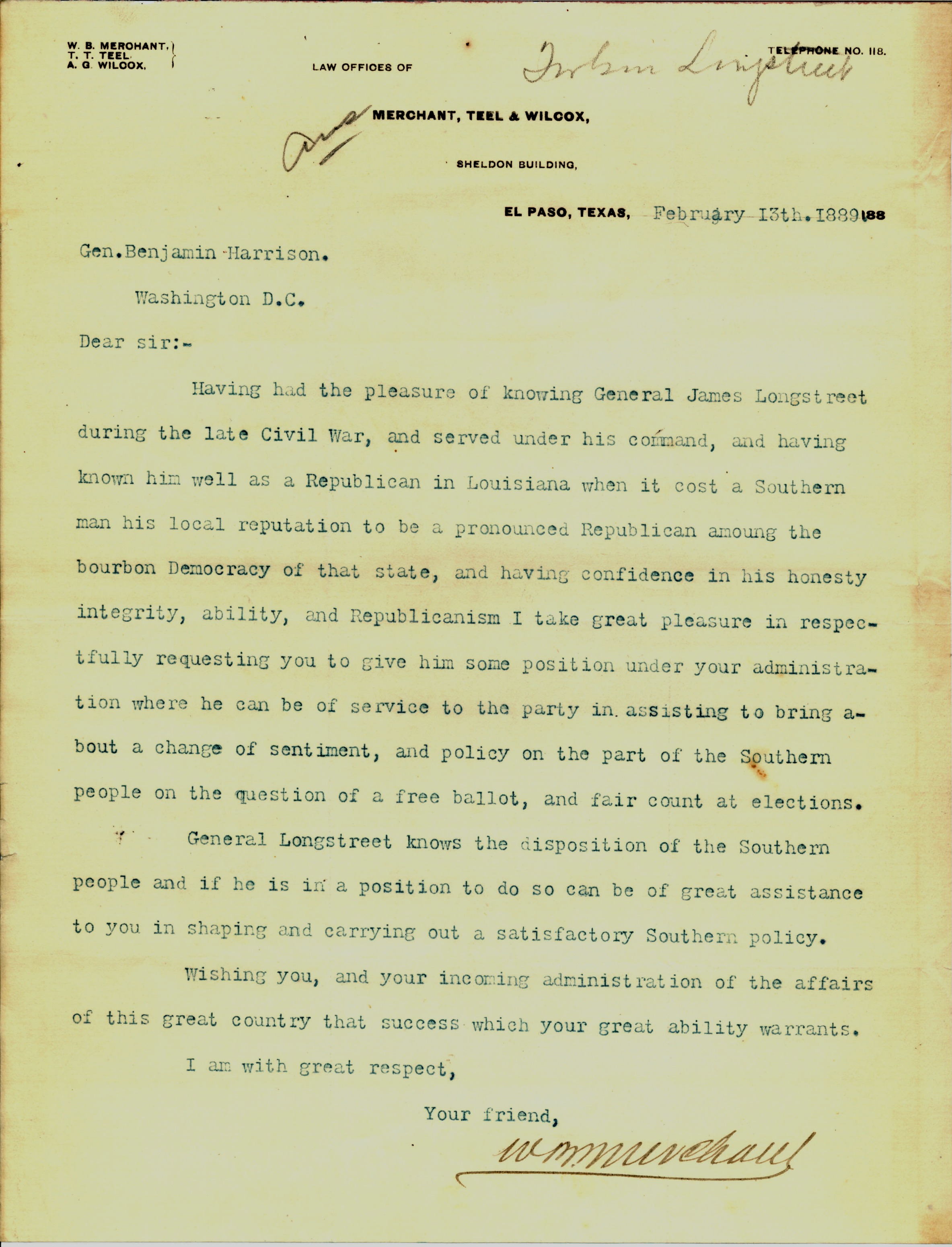 Longstreet did not receive a position in the Harrison Cabinet, nor did he become U.S. minister to Brazil. He continued his support of the Republican Party and was rewarded with the job of U.S. Commissioner of Railroads in 1897, and served in that job until 1904. James Longstreet died in Gainesville, Georgia, on January 2, 1904.

All letters come from the James Longstreet file in the Letters of Application and Recommendation During the Administrations of Cleveland and Harrison, 1885-1893, Entry A1-760, Record Group 59: General Records of the Department of State, National Archives.

James Longstreet From Manassas to Appomattox: Memoirs of the Civil War in America

Caroline E. Janney Remembering the Civil War: Reunion and the Limits of Reconciliation

2 thoughts on “James Longstreet: After the Civil War”