Today’s post is written by Zachary Dabbs, Processing Archivist at the National Archives in College Park.

Early in 2016, the Electronic Records Division of the National Archives and Records Administration received an unusual collection of donated electronic records. The original paper records, found to be radioactive, were discovered by the Environmental Protection Agency (EPA) during cleanup operations at the Bloomsburg, Pennsylvania Safety Light Corporation Superfund site. Donated by the Safety Light Corporation and scanned by the EPA, these electronic records document the perspective of the United States Radium Corporation (USRC) and its predecessor, the Radium Luminous Material Corporation (RLMC), on the story of the radium luminous paint dial painters, popularly known as the Radium Girls. These digitized records are now available in the National Archives Catalog as Records Related to Radium Dial Painters, 1917-1949 (National Archives Identifier 40978844).

Following Marie Curie’s discovery of the element radium in 1898, scientists and entrepreneurs sought to understand and exploit the element’s properties. One such was Dr. Sabin von Sochocky who found that by using a minute quantity of radium in combination with zinc sulfide he could produce a paint with a soft glow visible in the dark. In 1917, his RLMC established a plant in Orange, New Jersey to manufacture and apply this luminous paint, sold under the name Undark, to watches and instrument dials. “Radium dial” watches were one of the company’s most successful products, valued in the trenches of World War I and considered fashionable in the United States.

To apply its paints the RLMC, like other companies manufacturing radium dials, established several dial painting studios staffed primarily by young women. The process involved mixing the paint, provided to the workers as a powder, and using a fine brush to paint each number and arm in the dial. To keep a fine point on the brush the painters used a technique known as lip pointing, placing the brush between their lips, and as a result ingested a minute quantity of radium with each dial. Meanwhile, the powdered paint proved pervasive in RLMC plants; in later years former dial painters would recall their hair and clothes glowing softly after the day’s work.

In 1921, Dr. von Sochocky resigned from the RLMC and soon after the company reorganized as the USRC, which reduced, and eventually eliminated, its dial painting operations. Meanwhile, the consequences of this work began to emerge among some of those formerly employed in its studios. The first signs typically appeared in the mouth, with dial painters seeking relief for rotting teeth and persistent pain, which proved the result of necrosis in their jawbones. Anemia, fatigue, miscarriages, and fragile bones afflicted a number of the former dial painters, with many of the most severe documented cases found among those employed by the RLMC between 1917 and 1920.

For some time after its discovery radium was considered safe and was even advertised as a beneficial substance. Large amounts were recognized as dangerous, but minute quantities were said to invigorate the body and cure ailments. Dial painters were assured that the paint was safe and that the radium would simply pass through their digestive tract. Instead, radium’s properties are similar enough to calcium that it can be incorporated into bones, gradually killing the tissues and affecting the blood.

During the early 1920s, a growing number of scientists and physicians began to question the benefits of radium and, slowly, acknowledge its link with the debilitating illnesses afflicting dial painters. Complaints and lawsuits by former employees against the USRC began to proliferate in 1923. The company would remain under litigation from former dial painters until 1936, when the U.S. District Court for the District of New Jersey ruled against Vincent LaPorte, by that time widower of former dial painter Irene LaPorte, finding that the USRC had not fraudulently concealed the dangers of radium dial painting. This meant claims for compensation fell under a two year statute of limitations and led to the discontinuance of several cases in progress against the company and brought a windfall to its shareholders.

The USRC never admitted any liability for the illnesses of the dial painters and settled the suits brought against it out of court, until the LaPorte case. The most famous settlement went to Grace Fryer, Katherine Schaub, Edna Hussman, Albina Larice, and Quinta McDonald in June of 1928. 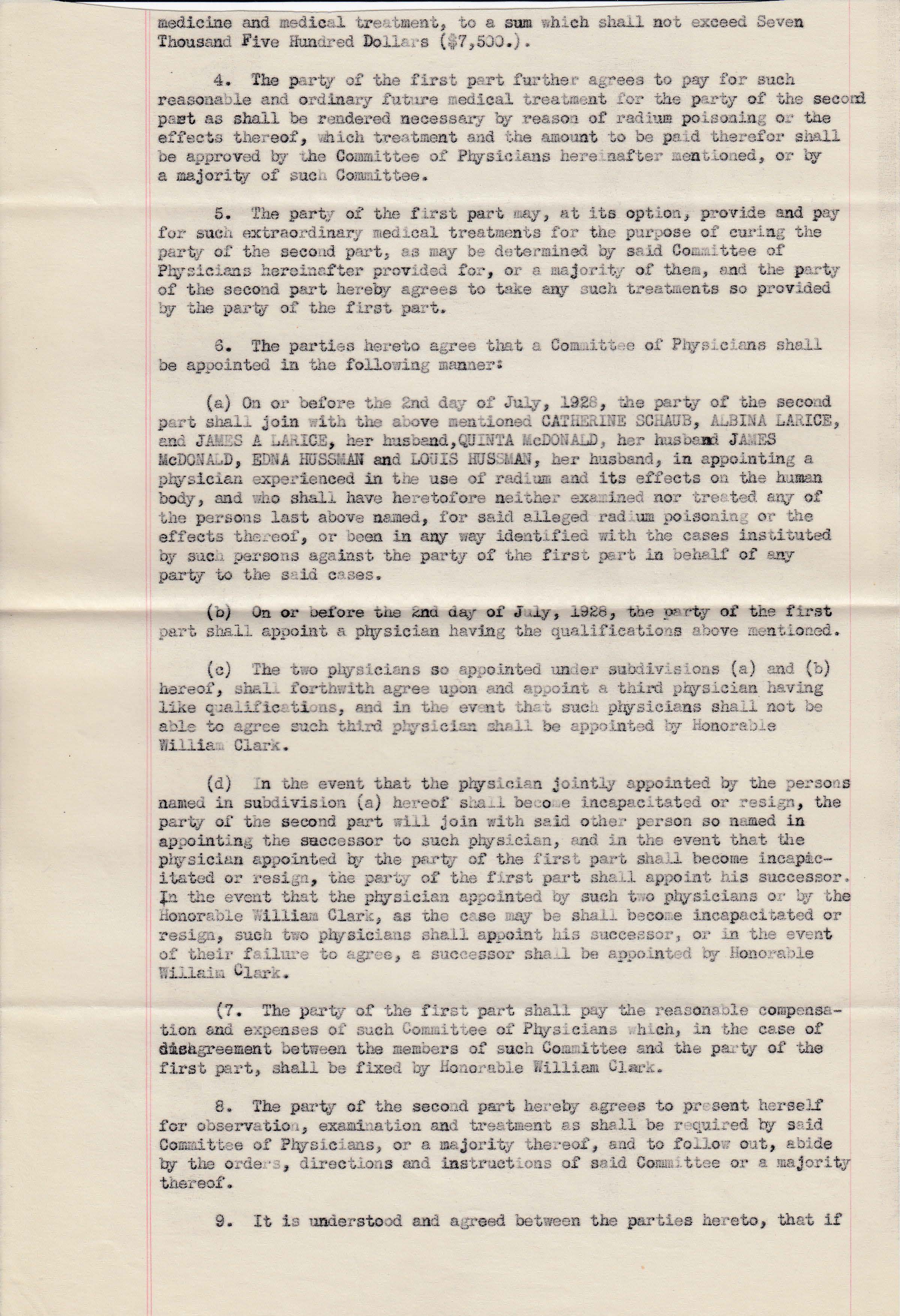 In this case, which received substantial attention in the press and from the New Jersey Consumer’s League, the dial painters received $10,000 (some sources state the amount was as high as $15,000), a $600 annuity while they lived, and the coverage of their medical expenses, subject to the approval of a committee of three doctors. These men regularly corresponded with USRC management, such as Vice President Howard Barker, concerning the condition and treatment of the five former dial painters, as well as concerning the costs associated with that treatment and anything learned from it. 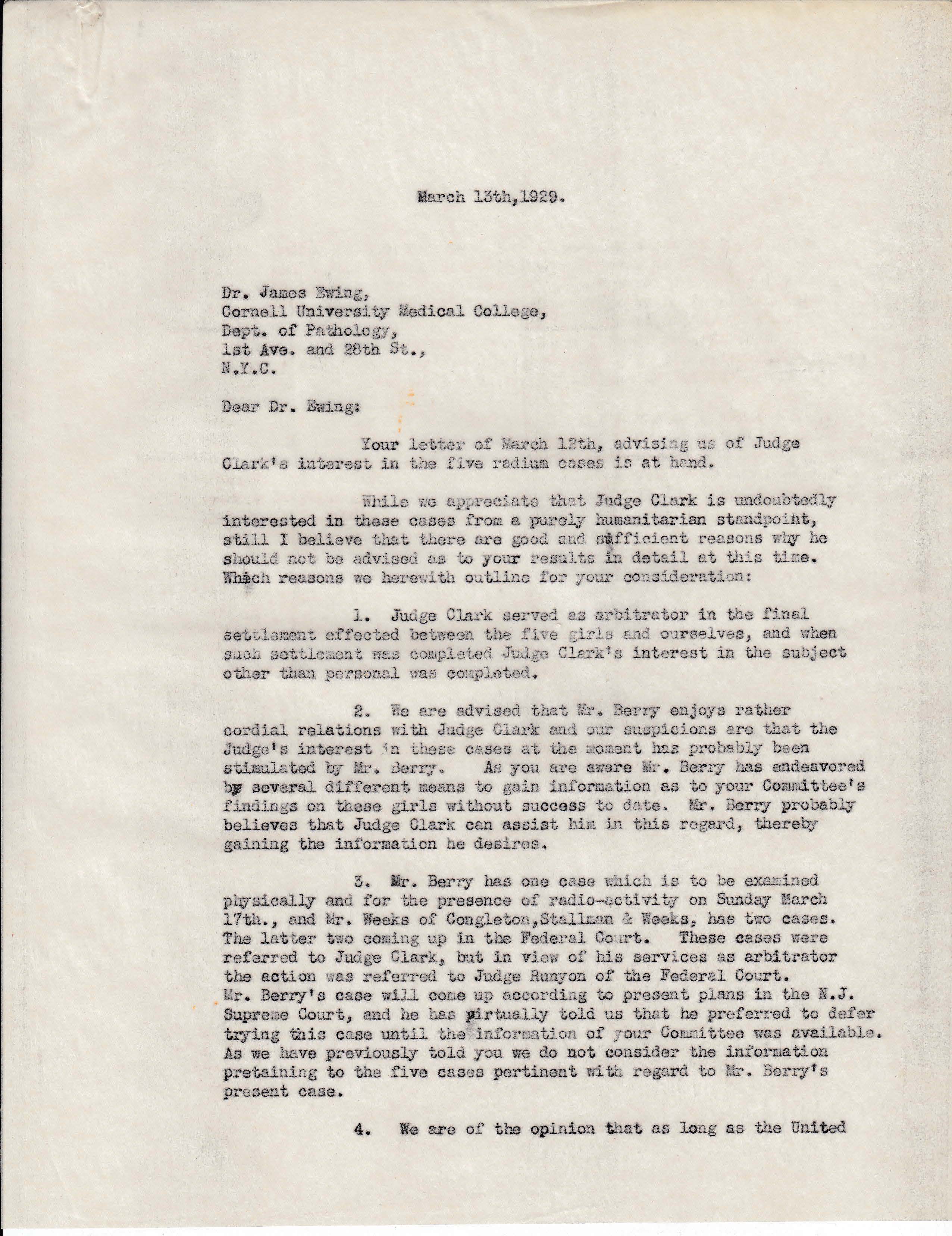 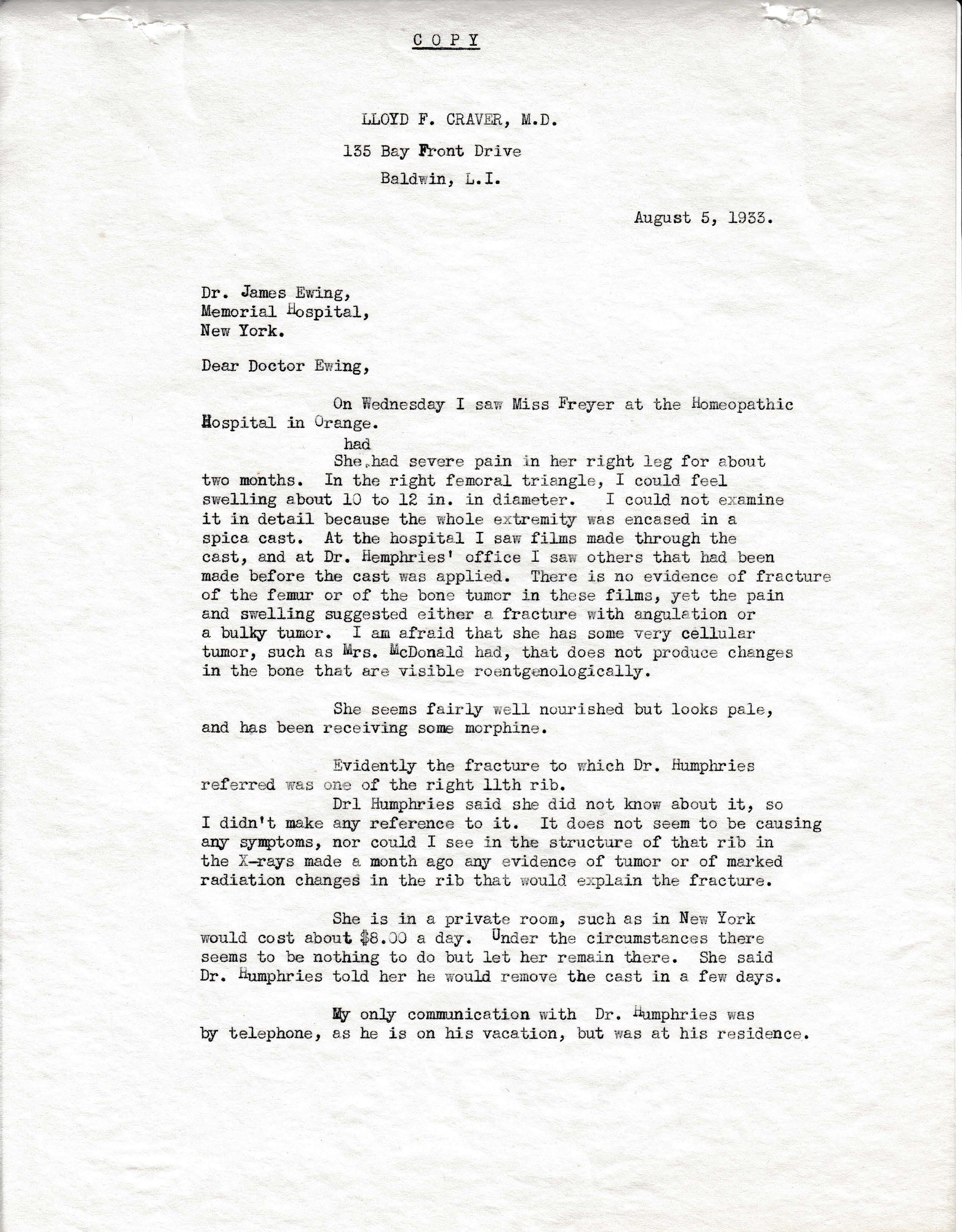 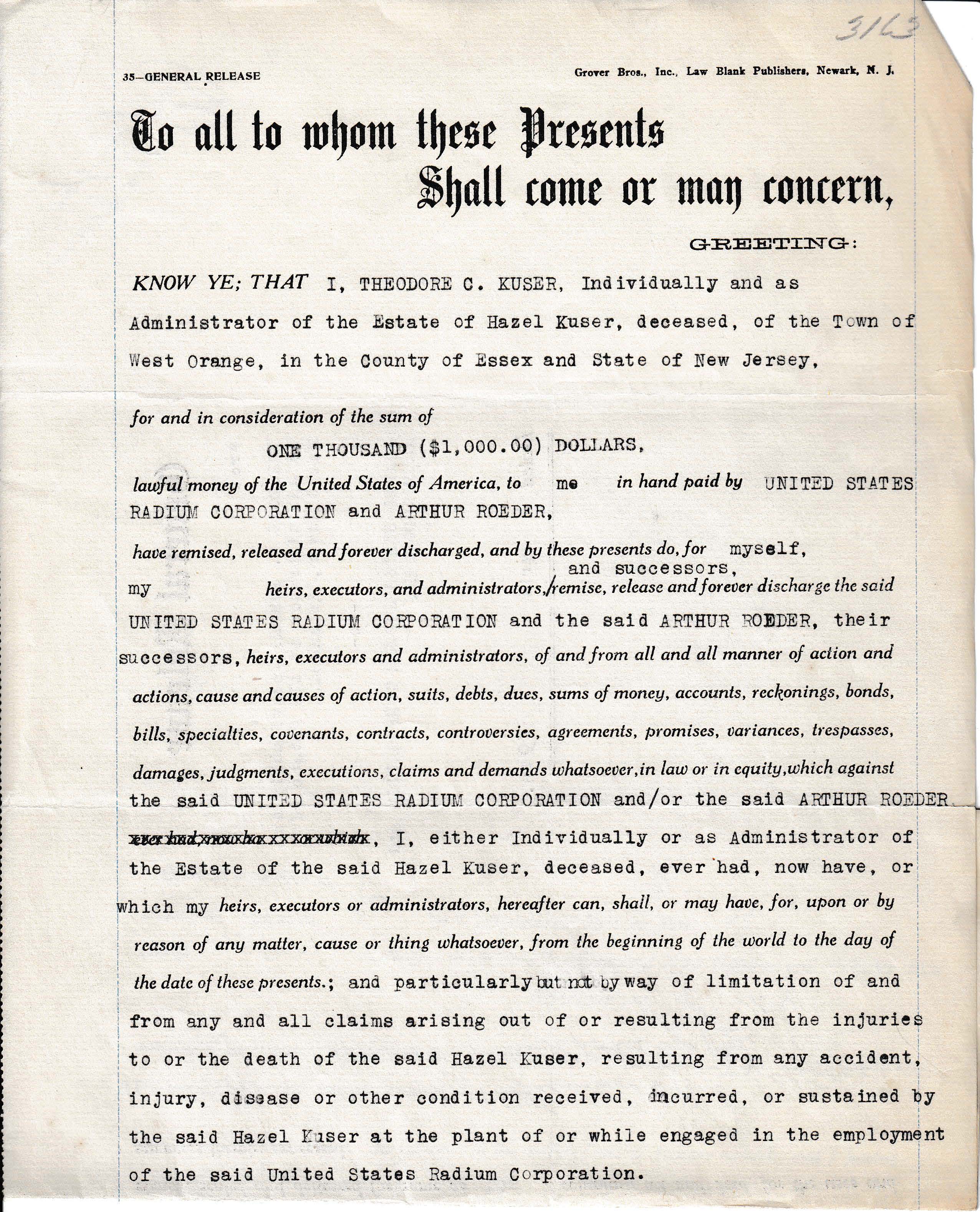 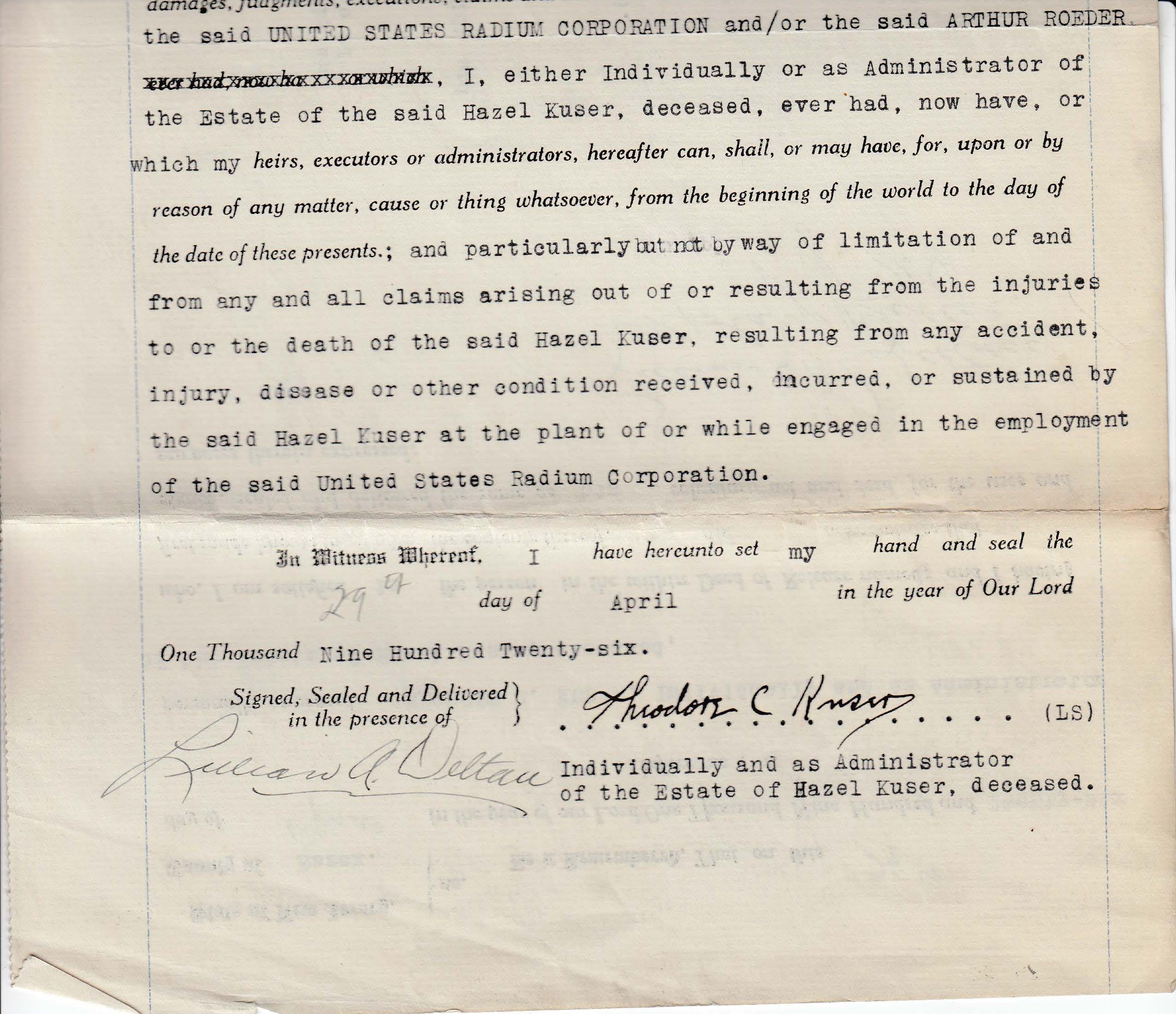 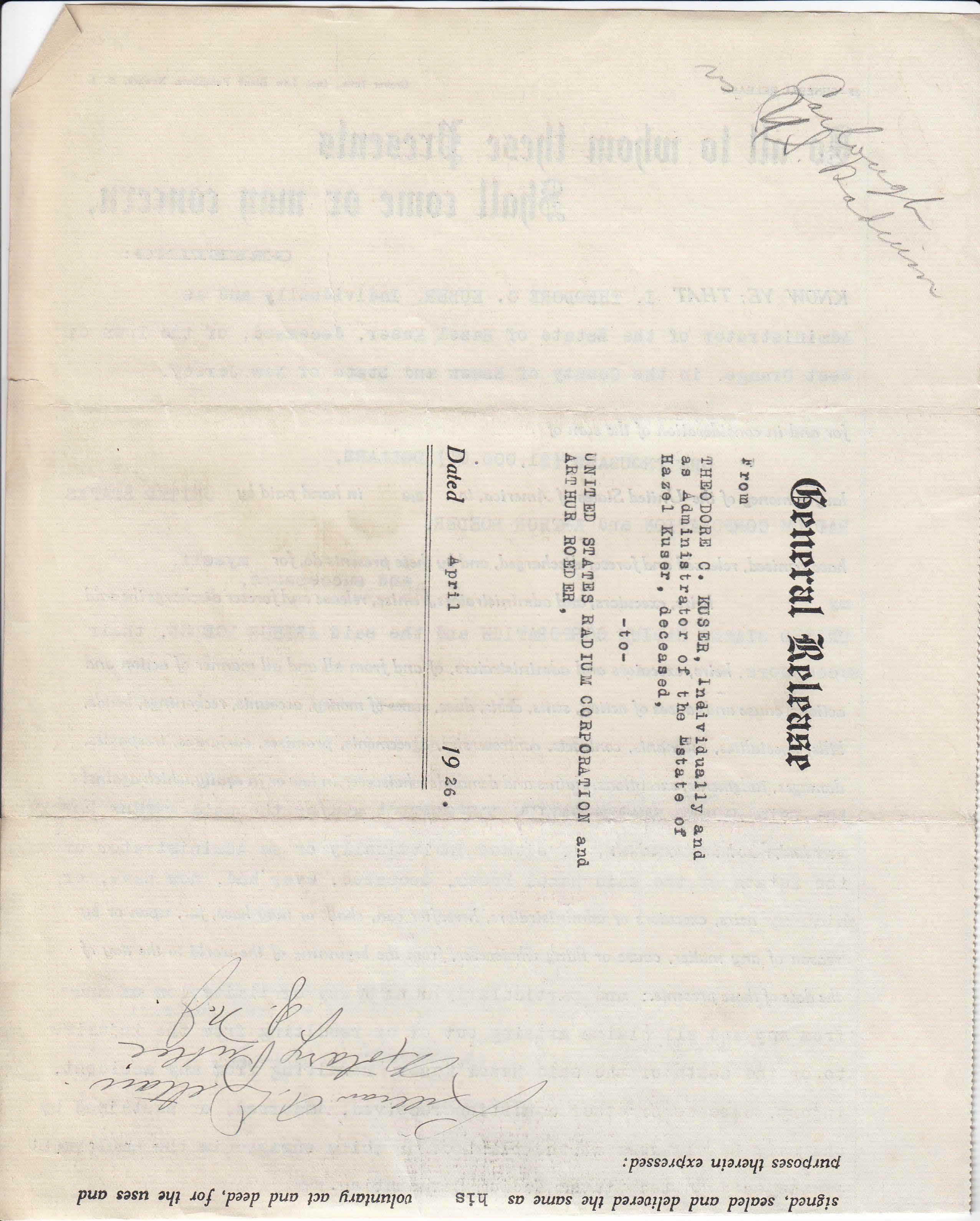 The majority of dial painters received no compensation from the company. In 1980, U.S. Radium was substantially reorganized and ultimately dissolved into new corporations. Its former radium processing facilities, which included the dial painting studio of Orange, New Jersey, where Grace Fryer and her compatriots worked, became a Superfund cleanup site. The EPA completed the cleanup in Orange during 2006, and cleanup work at the Bloomsburg, Pennsylvania facility, which is still ongoing, is where the collection was discovered. The radioactive paper records have been disposed of accordingly, but thanks to the Safety Light Corporation’s donation of the documents, and the EPA’s scanning of them, the history has been preserved and made available by the Electronic Records Division in the National Archives’ online Catalog.

Thanks to Jacqueline Kilby and Jana Leighton for help in preparing this post.

10 thoughts on “The Radium Girls at the National Archives”