Today’s post is the first of a two-part series written by Victoria-María MacDonald and Emma Taylor, who are volunteers at the National Archives at College Park.

The centennial anniversary of American involvement in World War I permits a closer look at the diverse racial and ethnic groups who participated in the Great War. In this blog post, we are attempting to reveal how the construction of social and military histories of Mexican Americans, particularly from Texas, called “Tejanos,” can be built through the examination of Records of the American Expeditionary Forces (AEF) in Record Group 120. Documents from diverse NARA collections, such as draft registration cards, the federal census, and even maps, further contribute diverse perspectives and triangulation to soldier experiences and backgrounds. Some records have been accessed through Ancestry.com, one of NARA’s digitization partners.

Histories concerning the role of soldiers of Mexican descent, whether U.S. born, naturalized, or seeking citizenship, are particularly scarce. The U.S. military’s classification of Mexicans as “White” in World War I – and thus interspersed with other ethnicities – has challenged historians documenting participation of this group of Latinos. The AEF’s 36th Division, nicknamed the “Lone Star Division,” and the 90th Division, nicknamed the “Tough ‘Ombres” [‘Ombres for “Hombres” in Spanish meaning “men”] offer researchers rich material to construct histories and collective biographies of Tejano participants.

The path to unearthing and bringing forward these narratives began with identifying divisions composed of former National Guard units from the Southwestern states. Fortunately, volunteers from the National Archives at College Park, had found a cache of over 2,000 first person accounts of soldiers “going over the top” in the 36th Division. Now completely digitized and searchable in the National Archives Catalog, these records offer rich descriptions during the intense battles in France during the last months of war in 1918.

As Spanish surnames began appearing in the records, particularly from the 141st Infantry Regiment, we began to ask ourselves who these men were in terms of social and economic background, and citizenship status. How did their identities as Mexicans impact their experiences embedded in a division with both European American immigrants, Texan Anglos, and Native Americans from Oklahoma? Thus, as the U.S. War Department in 1917 quickly ramped up its forces from state-level National Guard units, government documents (such as the one below) indicate where men were reassigned as a starting place for searching the large RG 120 AEF collection. Resultingly, while this blog focuses only on Texas Mexicans from the 36th and 90th Divisions, soldiers of Mexican descent from New Mexico, California, and Arizona can also be traced through original state-level National Guard assignments.

To the Line of Fire!: Mexican Texans and World War I, is currently the only book-length study on this topic. Author José A. Ramírez utilized samples of Spanish surnames from draft registration cards in RG 63, Records Relating to Registrants, Records of the Selective Service System, to estimate that of the approximately 36,000 Mexican-origin men who registered for the draft, 5,000 of them served.The draft registration card below from Private Epigmenio G. Garcia of Headquarters Company, 141st Infantry Regiment, 36th Division, illustrates some of the  details of soldiers’ backgrounds available from these primary source documents.

Private Garcia appeared to the local draft board in Cameron County, Texas, on the first registration day for World War I — June 5, 1917. He reported that he was “natural born” in Raymondville, Texas. Garcia was thus not eligible for an exemption in this draft round as he was a U.S. citizen, reported no dependents, and did not have any disqualifying disabilities. His job  as a “Traveling Salesman,” for the “Great [sic] State Patrolmen’s Association,” suggests literacy in reading and writing. Indeed, Pvt. Garcia signs his own name (other conscripts could only place a mark [x] for their names), and his signature also matches that of his well-written account only four months later about the battlegrounds of France.

The U.S. military posthumously recognized David Barkley with its highest distinction, the Medal of Honor. He was the only soldier of Mexican origin from the Great War to receive such an honor. While he was serving, however, David Barkley did not mention his mother’s Mexican heritage or surname (Cantú) to avoid discrimination. One of Barkley’s descendents revealed in 1989 that his mother was Mexican. While some brief histories of Hispanic veterans mention the few who received awards from the U.S. and France, this essay focuses on showcasing documents illuminating the everyday and virtually unknown soldiers and few noncommissioned officers who fought on the front lines and trenches in France. They were gassed, wounded, shell-shocked, and killed alongside over one million U.S. soldiers who served abroad, one-fifth of whom were foreign-born. Their stories merit inclusion in the narratives of World War I history.

We have constructed Towards a history of Mexican American participation in World War I in two parts. In Part One, we draw from the almost two dozen written accounts signed with Spanish surnames, and confirmed as Mexican Texan origin through other sources, to reveal how linking them with census, draft registration cards, transport ship passenger lists and other federal records from the National Archives can flesh out richer profiles of these doughboys.

“Over the Top”  Experiences of Texan Mexicans in the Trenches

When  President Woodrow Wilson declared war in 1917, the U.S. military force barely numbered 100,000 men – mostly concentrated in the state-level National Guard Units. Among the hundreds of thousands of men who registered for the first round of the draft that year were immigrants from all corners of the world, particularly Europe.  Historian Nancy Ford recounts how the War Department was “shocked” to discover that approximately one-fourth of the draftees were either illiterate in their native language and/or functionally illiterate in English. War Department rules required volunteers or conscripts to read or write English in order to serve. In response, the War Department created the Foreign-speaking Soldier Subsection (FSS) in January of 1918 to quickly devise a means to  teach recruits basic English and engage in Americanization programs. In Americans All!:  Foreign-born Soldiers in World War I, Ford details how a successful  English language curriculum developed at Fort Gordon, Georgia was exported to several camps as “the Gordon Plan.”   Most soldiers only received three months of training, resulting in many achieving only functional literacy. An indication that the brief training was insufficient is evident in the personal account of Private Pablo Cortez, Company M, 141st Infantry, which combines broken Spanish and some phonetic English.

Transcription and translation of Private Cortez’s letter proved challenging as revealed below: 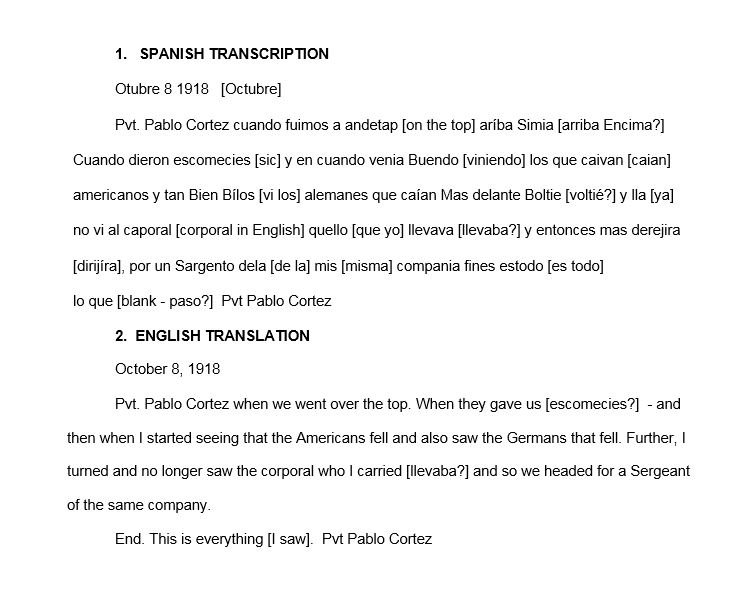 At the other end of the literacy spectrum is the well-written and lengthy account below of Sargent Miguel Barrera of Company B, 141st Infantry (NAID 77419026). A native of Laredo, Texas, this non-commissioned officer was placed in command of B Company with little experience.

Barrera exemplifies the concerns of both the Allies and Commander in Chief General of the AEF, General John J. Pershing, that troops had not had enough time to train either in the U.S. or once in Europe.  He honestly described feeling “green,” and naive to the realities of war. The Tejano’s account is one of brutal German fire in the Champagne Sector of the Meuse-Argonne offensive between October 6th and October 28th, 1918. He acknowledged:

“we were al [sic] green men and being the first time under fire, we didn’t know what to do, but any how we took the front line, the G.I. can were falling all along the line of course being my first night and there [sic] were falling about 2 & 300 yds away from where I was. I didn’t pay much attention to the G.I. can, but my God when the G.I. cans begin to burst about 10 and 25 yds from where my Hole was, then I begin to get scared, and started to pray and I ask one of my men if he was afraid of the G.I. cans and he said, no, not much as long as they don’t hit in my hole, so then I didn’t have much chance to tell him I was afraid of the G.I. cans….”

(The G.I. cans were named because these German artillery shells were made of galvanized iron.)

Sgt. Barrera gathered courage from one of his men, but he castigated himself for being so eager to go over the top:

When Barrera finally did go over the top and crossed no man’s land he exclaimed, “I could hear and see the dust of the machine gun bullets hitting all around me and at the same time my comrades falling all around me, and when we reach our objective and we dug our holes and there where [were] only 8 men left of our bunch, we stayed in our holes all surrounded by machine guns and snippers [sic].” Ship transport passenger lists indicate that he sailed home from France alive despite the Sargent’s harrowing experience crossing no man’s land and going over the top at least twice.

Not all enlistees saw combat. Richard Faulkner in Pershing’s Crusaders, discusses the hard and unsung work of noncombatant personnel who engaged in the “labor intensive” job of “moving, feeding, supplying, paying, healing, and administering a two-million-man army in France”.[1] Although often disparaged by combat soldiers because of their distance and safety from the front lines, hundreds of thousands of men were essential to allow combatants to perform. In a simple account with clear penmanship, Sgt. Joe Benavides (NAID 77419086) notes, “Though I didn’t get into action I performed the duties of a mess Sgt feeding the men and taking Chow to them while they were in action.”

These handwritten accounts of Mexican Texans during some of their most intense moments capture the range of their feelings from anticipatory excitement to fear of death.  The dates of the essays in October and November 1918, indicate they were written immediately or soon after combat. Compared to memories recalled later, such as oral histories or autobiographies, the authenticity of the essays render them valuable primary sources.

In Part Two, to be published later this fall, we will introduce Private José de la Luz Sáenz (1888-1953), teacher, writer and activist,  who wrote the only extant diary of a Mexican American Doughboy. We will showcase how diverse records of the 90th “Tough ‘Ombres” Division, such as maps, field messages, casualty lists, and even cemetery headstone records can be linked and corroborate first person accounts.

Many thanks to Judy Luis-Watson for her assistance and the team of dedicated volunteers and staff at the National Archives at College Park who worked to preserve and make these WWI records available online.

Oropeza, Lorenza. “Fighting on Two Fronts: Latinos in the Military,”  American Latinos and the Making of the United States: A Theme Study. U.S. Department of the Interior/National Park Service. Washington D.C. 2010.

Ramirez,  José A. To the Line of Fire!: Mexican Texans and World War I. Texas A&M University Press. College Station.  2009.

One thought on “Towards a History of Mexican American Participation in World War I, Part I”