As Black History Month draws to a close, nothing illustrates the great progress of the civil rights movement more than a glimpse at a bleaker era. The work we do every day at the National Archives is for the express purpose of preserving historical context, even the disturbing parts, as exemplified in today’s post, written by Lopez Matthews, Jr.

The exercise of processing records can at times become mundane and redundant, especially when you’ve got thousands of boxes to do. However, every once in a while a document appears that catches your interest and not all of it is good. While processing a box of correspondence, I placed a sheet of crumbling paper into a polyester sleeve, turned it over, and the image of a noose caught my eye. Upon further inspection, I discovered the document was an appeal to African American soldiers to practice methods to prevent being accused of rape! 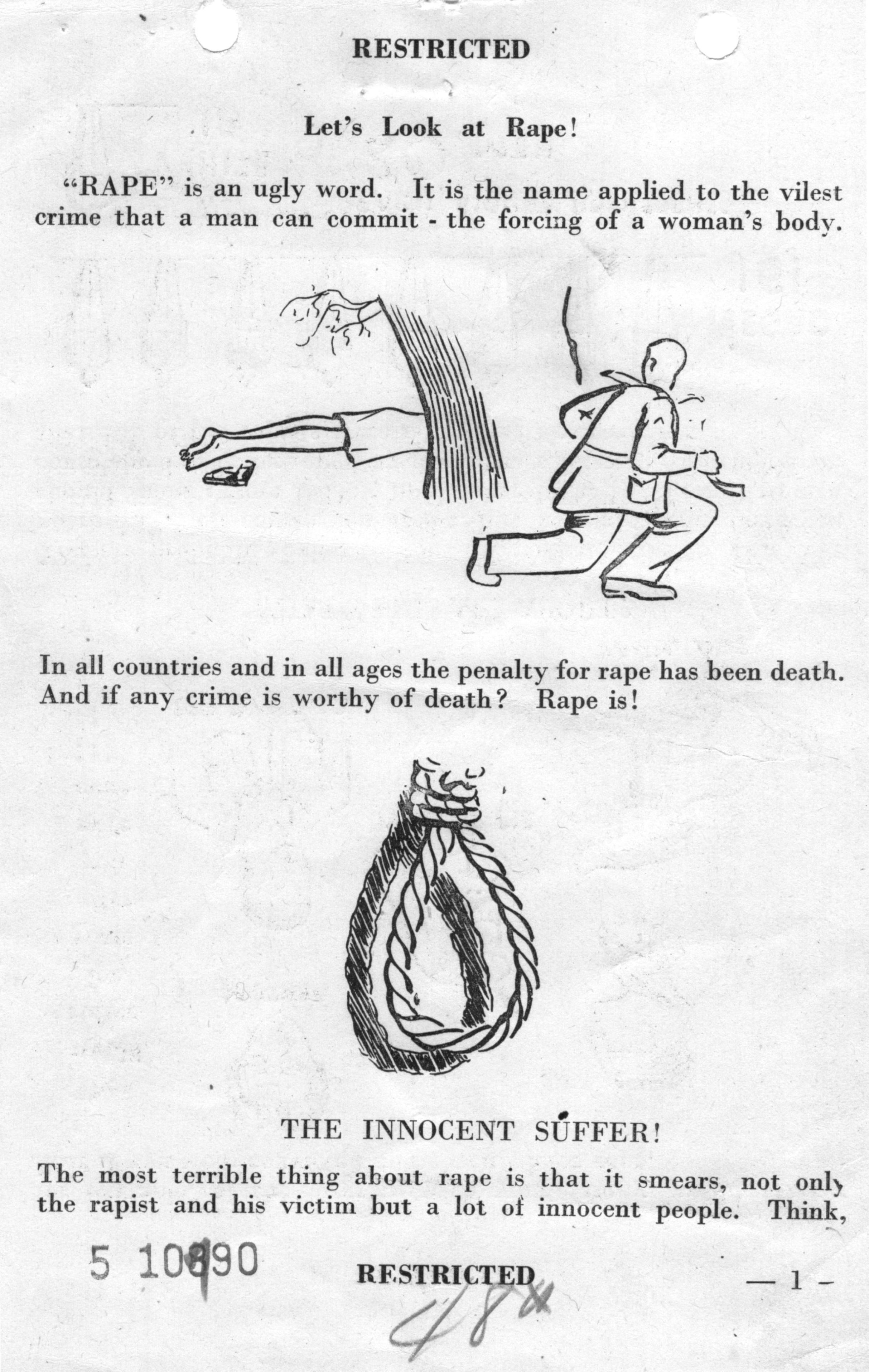 As a student of history, I knew that while serving in the European Theater of Operations during World War II many African American soldiers were often and more often than not falsely accused of rape. With this knowledge the existence of the document was not surprising.

Emblazoned with the title, “Let’s Look at Rape!” the document explained that the  soldiers must control themselves because if they were to be convicted and executed for rape it would mark not only themselves but their families, their “sweetie pies,” their entire race and “even that darn dog.”

It also instructed the soldiers to “beware these women of easy virtue” because they might be tools of the Nazis employed to stir up racial hatred. After all, “Nazis and their fascist friends are not above pulling off tricks like that.”

Appealing to the soldiers’ knowledge of the growing civil rights movement in the United States, the author noted that the rape statistics would be used to continue the denial of rights for African Americans:

“There are demagogues who will take these rape figures and use them as an argument why those basic American rights for which we have been clamoring should be denied us. ‘Look,’ they will say, ‘At how the American Negro soldiers raped the women of France. This proves that all Negroes are rapists and criminals. They lack self-control. Shall we turn them loose on the women of America?”

The soldiers were also advised not to drink too much because “that cognac can get you into very, very bad trouble.”

The document was signed “A Negro Chaplain.”

This rash of rape convictions and executions was highlighted in an article entitled “The Trial of a Negro,” published by Britain’s Tribune newspaper in June 1944, a clipping of which is also found in the records. The article contained a verbatim transcript of the rape trial of a 30-year-old African American soldier accused of raping an Englishwoman and sentenced to death during a military court-martial in England. The editors printed the transcript in the midst of a war “in defence or restoration of the dignity and equality of all individuals” to highlight the hypocritical nature of fighting such a war while still practicing blatant racism.

According to the article, the soldier was convicted despite physical evidence pointing to a consensual relationship and evidence of coercion in forcing the soldier to sign a confession.

At one point, the prosecuting officer agreed with the defense attorney that the victim’s statement seemed unrealistic, including the part where she snuck out of her house, and climbed a four foot fence with the soldier, merely, she said, to show him where to go rather than simply offering directions. To account for this, he replied “…in our relations with the English they do things we don’t do…” With that, the soldier was convicted and sentenced to “hanged until dead.”

Both of these documents are found in boxes marked “General Correspondence.”

They also reveal the sadder side of American history. The subtle racism and paternalism in the formerly restricted documents provide a surprisingly candid view of how the army dealt with African American soldiers in World War II. 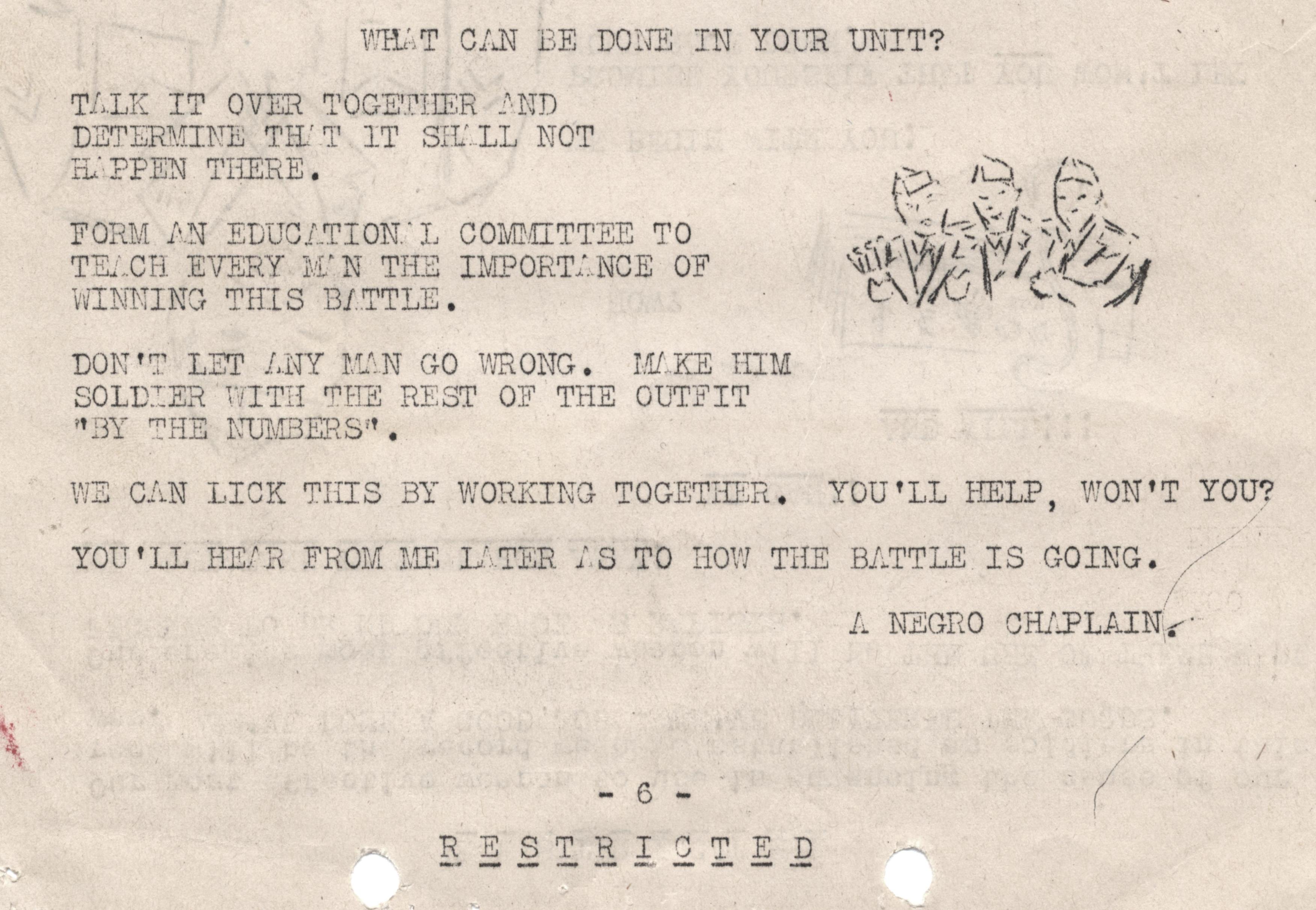 9 thoughts on “That Cognac Can Get You Into Very, Very Bad Trouble!”